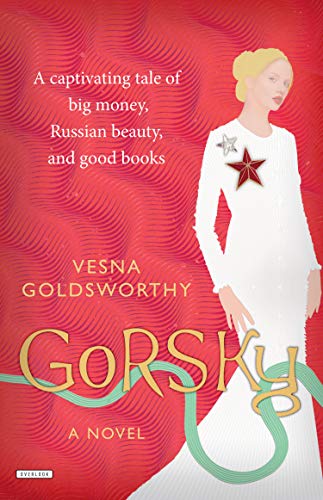 Gorsky is an homage to The Great Gatsby, with an interesting premise, but author Vesna Goldsworthy lacks subtlety in crafting this tribute. Nonetheless, the novel is no less entertaining for her gaffes.

The one-to-one relationships between the characters and the parallels in the plots and motives are evident—a little too much so. Tom and Natalia Summerscale are Tom and Daisy Buchannan (Daisy Summerscale is their daughter); Nick Carraway is Nicholas Kimović; Jordan Baker is Gergan (Gery) Pekarova, former Bulgarian gymnast and Natalia’s personal trainer; Myrtle Wilson is Janice Allaoui; and so on.

Set in modern London, between the affluent areas of Chelsea and Knightsbridge, the narrator Nick works in a bookshop, Fynch’s, and lives in “a mere matchbox” mirroring Nick in the Great Gatsby’s living situation. Nick is a Serb who fled the Balkan conflicts in the 1990s, his mother driving him to the border to escape; he sought asylum in Amsterdam and eventually ended up in England with a PhD in English literature.

Nick nurses an infatuation with Russian emigre Natalia Summerscale whose world revolves around Russian art and her daughter Daisy. She often patronizes Fynch’s, looking for obscure critics and biographies, which Nick is quick to have on hand, anticipating her interests so she will continue to call or come in.

Gorsky, (Roman Borisovich Gorsky) the character the book is named for, is a Jewish Russian oligarch, with a questionable source of wealth, who sends others to do his bidding. Wealth is of no object to him as sets about building a private empire in London to win back his lost-love. Gorsky commissions Nick, with the first of several quarter-of-a-million pound checks, from a “chequebook bound in marron crocodile skin” to create a library for the grand London palace he is building. Nick takes to this task with relish, “determined to make Gorsky’s library my literary masterpiece.” Gorsky is looking to win back Natalia from Tom and seeks to appeal to her intelligence and tastes through the best private library in London, if not all of Europe.

As Nick is drawn into Gorsky and Natalia’s worlds, he attends lavish parties and gets involved with Gergana Pakarova, and like her counterpart Jordan Baker, Gery tells Nick about Gorksy’s romance with Natalia a decade before when he proposed to Natalia and was rejected. When he returns, as he promises to propose again, it is too late and Natalia has married Tom. Meanwhile, as in the Gatsby, Nick is drawn into Gorsky and Natalia’s relationship as a middleman and is asked to set up a meeting between them on the anniversary of Gorsky’s original proposal to her.

The novel is set in the modern century with echoes of New York and the 1920s with its fascination and obsession with opulence, fashion, greed, and sex. Some readers may enjoy the similarities with The Great Gatsby and others may be dismayed when they begin reading it and feel they have been scammed out of an original work. Overall, the novel is fun, deviating just enough from The Great Gatsby and remaining similar at the same time to work for the overall narrative, though the writing itself needs stronger editing to allow for more subtlety and surprise.