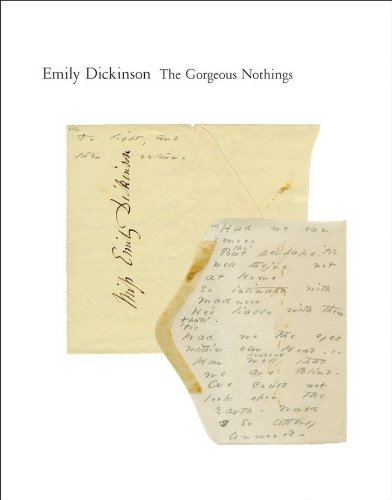 “. . . one gorgeous book . . . like attending a museum exhibition in the comfort of one’s own home.”

At its heart are 52 photographic reproductions—with transcriptions of the text on facing pages—of drafts of texts (mostly poems) that during the final seven years of her life and career Emily Dickinson composed in pencil on the backs of envelopes, some of whose flaps she had opened beforehand to increase the available writing surface. Viewing them in this book is like attending a museum exhibition in the comfort of one’s own home.

Even with opened flaps the resulting pieces of paper are relatively small, and on some Ms. Dickinson further divided the page into columns resulting in poems with shorter lines than appear in the posthumously published editions of the same poems. Capitalization might offer some indication of where she intended lines to begin, but Ms. Dickinson was a student of German and adopted that language’s practice of capitalizing common nouns, and the verse is not as metrically regular as her earlier poems.

The words are also spaced differently than in the printed editions. In some cases the space between words is farther apart, and there are frequently alternate words above or below or elsewhere on the page preceded by a plus sign.

The alternative line breaks and word choices in these works in progress reveal a variety of possible versions the poems could have become. Ms. Dickinson and Walt Whitman are considered the first modern American poets, but the alternative versions suggested by these drafts perhaps point to her being the first postmodern poet.

In one of several informative and insightful essays that accompany the reproductions coeditor Jen Bervin quotes Jerome McGann, “Emily Dickinson’s poetry was not written for a print medium, even though it was written in an age of print. When we come to edit her work for bookish presentation, therefore, we must accommodate our typographical conventions to her work, not the other way around.”

Ms. Dickinson began writing poetry at age 28 and wrote her first 800 poems by the time she was 35. She composed these early poems in Protestant hymn meter (nearly all can be sung to the tune of “The Yellow Rose of Texas”), and after revision made clean copies that she gathered in 40 bundles of 20 poems each and called fascicles.

Over the next two decades she wrote another thousand poems, some of which, as already noted, are metrically less formal than her earlier work. From age 48 to her death at age 55 she wrote using short stubby pencils (the kind that in the pre-digital age were provided to library patrons, baseball fans keeping a scorecard, and golfers) on any available scrap of paper including candy wrappers, the backs of letters, and in the case of the 52 presented here, envelopes.

She no longer gathered them into fascicles and instead either filed them in folders or recklessly mailed them to friends and relatives with whom she maintained active correspondences. Her poems are still turning up in letters discovered by the descendants of her correspondents or by antiquarians.

The reproductions of the envelope writings include not only the back sides of the envelopes on which Ms. Dickinson wrote but also the front sides with stamps and addresses (the book cover includes an example of both sides). Some were addressed to her and others to other people; the ones addressed to her have her name on the top line and on the second line, Amherst, MA, which was then so small that the postmaster knew where everyone lived.

The title The Glorious Nothings comes from a poem comprising two wings of an envelope separated by a flap to which a smaller triangular shaped piece of paper is pinned which co-editor Martha Werner describes:

“On the right wing, the lines ‘Afternoon and | the West and | the gorgeous | nothings | which | compose | the | sunset | keep’ slant upward into the west.

“On the left wing, the lines ‘Clogged | only with | Music, like | the Wheels of | Birds’ slant diagonally into the east.

“On the smaller, pinned wing, writing rushes beyond the tear or terminus where the visible meets the invisible in ‘their high | Appoint | ment.’”

Ms. Werner then quotes the prose correspondence from which the poem emerged, a February 1885 letter Ms. Dickinson received from her friend and girlhood classmate at Amherst Academy, Helen Hunt Jackson, who was then living in Santa Monica, CA, and two drafts of a reply Ms. Dickinson composed in March 1885 but had not yet posted when she read of her friend’s death in a newspaper (Ms. Dickinson died 14 months later in May 1886).

Ms. Hunt Jackson wrote that she was writing before breakfast facing the ocean looking toward Japan “and there is a positive cackle of linnets.” After including her five line poem “Take all away from me, but leave me Ecstasy” Ms. Dickinson paraphrases her friend, “That you compass ‘Japan’ before you breakfast, not in the least surprises me, clogged only with Music, like the Wheels of Birds.”

For fans of Ms. Dickinson’s poems who appreciate that kind of literary detective work The Glorious Nothings would make a handsome gift.