Goodnight iPad: A Parody for the Next Generation 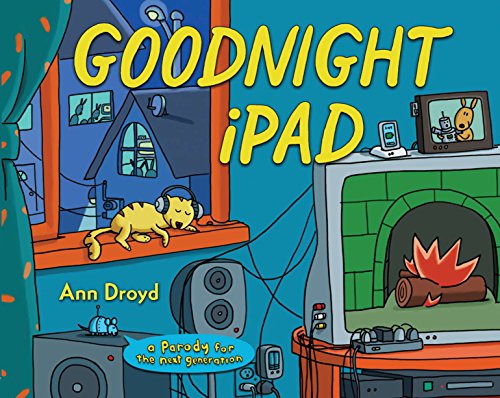 Remember Goodnight Moon? Margaret Wise Brown’s classic bedtime tale, published in the late 1940s? Pictures by Clement Hurd? That sweet, ever-so-slightly melancholic rhyming ode to the sleeptime ritual we all go through with our children?

Nope. This book is alive with activity. It may rhyme like its progenitor, and it may make references to the classic throughout, but Goodnight iPad is no cutesy bedtime book; instead, it reeks of cynical humor—a humor borne of pitting the technologically advanced “with-it” generation against the stodgy, pre-computer generation.

The book opens with:

“A bird launching over the moon . . .” (Yes, you guessed it: The bird in the image is, of course, the ubiquitous one from the game “Angry Birds.”)

“There were three little Nooks
With ten thousand books . . .”

Yep. Goodnight IPad is all about name-dropping. I wonder how much graft went into the production of this book because Goodnight iPad is a paean to product placement. Every major technological gadget that has made its way into our lives in the last few years gets a nod. From Facebook to email, LCD TVs to mobile apps, Androids to the MacBook Air, there is nary a cool electronic object that escapes mention.

And that is the point. Everyone in the bunny family, instead of going to sleep, is fiddling with something electronic. No one is interacting with anyone else. There is no bunny-to-bunny contact, only electronic enlightenment, a nirvana achieved by each through their own device—so to speak.

The bings, bongs, and beeps / Of e-mails and tweets . . .” reign supreme, until a "fed-up” old lady starts her one-woman crusade against electronic proliferation, confiscating an iPad and continuing until every single gadget has been ripped out of the outstretched hands of its disbelieving, outraged, and loudly whining owner/user.

And this is where the book starts to get funny. Ann Droyd, otherwise known as the über-talented author-illustrator David Milgrim, illustrates this old woman’s anti-electronics rampage throughout the house with such delight and humor that you cannot help but laugh. The graphic, vaguely Bart Simpson-like desperation of the bunnies, escalating as each device is literally tossed out the window, is truly giggle-worthy. The pictorial guffaws reach an apex with cartoon-like depictions of the biggest complaining blubberer of all, the dad of the family. His arms are wrapped around Grandma’s waist, his torso dragging along behind her as she marches purposefully throughout the house, depriving every last bunny of every last LED.

Can’t you just relate? Have you ever tried to suggest something like, I don’t know, a family conversation while simultaneously trying to rip an iPod or iTouch out of an unwilling kid’s hands? Have you ever had to stand in front of the TV, blocking the screen and yelling at the top of your lungs to get your children’s attention at bedtime—only to have them duck their heads around your body and completely ignore you? I feel for this old lady. All she wants is a little peace and quiet, for godssake! Some old-fashioned storytelling using something that looks like pieces of paper stuck together in between two pieces of cardboard. Is that really too much to ask?

Now go to bed. Don’t ask me for any more details about this ancient paper-based technology called Goodnight iPad. I have to check my emails, Facetime my sister, google a synonym for the word “thingie,” and finish an e-book before I can even think of getting some shuteye.