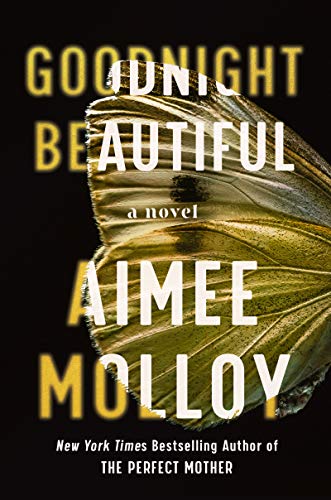 “What distinguishes Goodnight Beautiful is Molloy’s spectacular feat of misdirection and uncanny success in unfolding revelations that are surprising yet believable from the early pages until the very last.”

Thriller fans love “twists” that make them think “wow, didn’t see that coming.” Those twists typically come close to the end of the tale, and are most powerful when they spark an initial surprise, followed by the realization that they actually make perfect sense based on both the literal and subtle storytelling up until that point.

In Goodnight Beautiful, Aimee Molloy sends readers on a whiplashing mystery ride that turns that whole convention inside out, with twist number one hitting at the one-third mark, followed by several more hairpin turns, and one thrilling, final plunge that lands the story’s most thrilling surprise.

It all happens at a breakneck pace, starting with opening chapters that feel like a voyeuristic look at newlyweds Sam Statler and Annie Potter. As a couple, they enjoy adventurous sex driven by fantasies happily discussed out loud, yet Sam in particular finds it difficult to be completely honest about his past and about troubling new developments in his life.

As a teenager, for example, he was a handsome star athlete known as a “heartbreaker” for his romantic track record who faced his own silent heartbreak due to neglect from his narcissistic father. As a 40-something therapist he’s a far better man than his father aspired to be.

Unless he really isn’t. Since we know from the beginning of the story that we’re dealing with untrustworthy characters, we get the sense that Sam’s deeply rooted psychological quirks will inevitably lead him to be unfaithful. That feeling is intensified by the fact that Annie–an accomplished Ph.D. who previously prided herself on her determination to avoid commitment—knew Sam for just a few months before the quick, no-frills ceremony that’s supposed to bind them together for life.

Nevertheless, she’s deeply in love and looking forward to a long life in a small upstate New York town enhanced by the wealth that Sam’s going to inherit some time very soon. So when Sam disappears in the midst of a treacherous storm she’s determined to do whatever it takes to find him, at least until she reads his mail and discovers there’s so much she doesn’t know.

Turns out Sam’s in the dark about a few things, too. It hasn’t occurred to him that the remarkable coincidences that enabled him to secure an aesthetically fabulous space for his therapy practice might be due to more than simple good luck. Meanwhile he and his patients are both unaware that their counseling sessions are easy to hear through the vent in the floor just above them. And he still can’t quite figure out why his mother—now hospitalized with dementia—has been lying to him about his father for the past several years.

If some of this feels reminiscent of the last 20 thrillers you added to your bookshelf it’s because it all fits into a popular formula for the genre. Unreliable characters and family secrets and historical intrigue are woven into what could have been a “Nothing Is What it Seems” tagline.

What distinguishes Goodnight Beautiful is Molloy’s spectacular feat of misdirection and uncanny success in unfolding revelations that are surprising yet believable from the early pages until the very last.

That success will lead many readers and reviewers to see a clear rollercoaster analogy in the narrative—which becomes even more exciting because the passengers are hiding behind masks in a hall of funhouse mirrors. You think know who you’re riding next to, but soon discover you don’t.