The Goodness Paradox: The Strange Relationship Between Virtue and Violence in Human Evolution 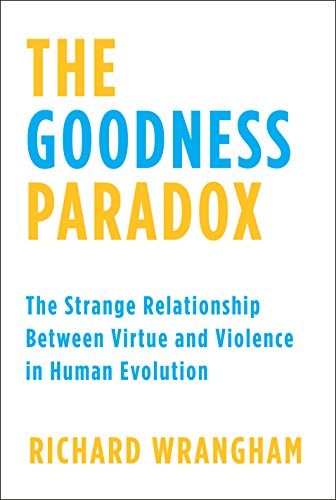 A great mystery has bedeviled science ever since Darwin made a bonfire of the design argument: How, if not by the benevolent hand of the Almighty, did human beings become so resoundingly odd?

A refrain of popular biology and zoology is that Homo sapiens is not quite the outlier he or she claims to be: everything we thought we owned exclusively, from tool use to dishonesty, is present in other species. And yet we are unique: intensely social, intensely cooperative, utterly dominant—and we even cook our steaks before eating them. Why?

The bit about steak was the subject of Harvard anthropologist Richard Wrangham’s earlier book, Catching Fire: How Cooking Made Us Human. In a very small nutshell: control of fire = cooked food = massively improved efficiency in digesting calories = time and energy to think, plan, and take over the neighborhood.

Now he argues that another strange (if not quite so unique) feature of our species may be the key to what formed us. All sorts of facts about human behavior and morphology make us appear to have been . . . domesticated. It’s Wrangham’s contention that indeed we were (not by a God wielding treats and a leash, but by natural selection itself); and that the key factor in this odd evolutionary process was our discovery—at the very beginning of our uniqueness, 3,000 centuries ago—of a taste for cool, planned, targeted, cooperative murder.

To a zoologist, “domestication syndrome” is simply a strikingly uniform evolutionary direction: the move from wolves to dogs, or cavies to guinea pigs, is a move to smaller teeth, shorter faces, more gracile bodies, less sexually dimorphism, smaller brains, and so on.

We tend to assume that this is, by definition, a process in which one species breeds out the aggression from another. But Wrangham gives a detailed and highly plausible account of how, just as “design” does not require a designer, this “domestication” doesn’t always require a breeder.

With admittedly few other examples to go on, his piece de resistance is the stark difference between chimps and bonobos, separated only by a million years and the Congo River. Bonobos are female-dominant, more gracile, etc. But above all they are far, far less reactively aggressive: they just don’t have the chimp’s inclination to rip out their neighbor’s throat right after ringing the doorbell. Chimps live in a savagely violent “dominant male” society; bonobos, like us, live in groups bound by what are, in effect, group-enforced moral rules.

It’s easy to deride evolutionary anthropology as a collection of just-so stories, and often the evidence we most need here is, as Wrangham admits, long gone. (What we really want, and can’t have, is a clear view of social behavior in Neanderthals, or our direct African ancestors.)

A few tantalizing facts aside, the bonobos (and a very few other species, such as red colobus monkeys) have to stand in. But they certainly do make plausible, at least, the speculation that a change in the social structure of violence, from aggressively dominant loner males to coalitions of dominant cooperators prepared to kill loner males, could have been the key to our snowballing success.

As in Darwin, the theory is built from and measured against many intersecting lines of evidence: the whole history of Dmitri Belyaev’s fascinating multi-decade experiments with foxes; why it’s plausible that a lower toleration for cooperation, rather than lower raw intelligence, doomed the Neanderthals once we showed up; the anthropology of tribal warfare; the suggestive history of photographer Edweard Muybridge’s damaged orbitofrontal cortex; how game theory has proved (even to economists) that the “rationality” underlying homo oeconomicus—alive and well in chimps—just isn’t the H. sap style; how it’s possible for someone like Steven Pinker to be right (perhaps) that the “better angels of our nature” are gradually winning in the long run.

All this is aimed at one idea: We are what we are because chance facts about our environment c. 300,000 BCE caused a switch from the chimp-like typical hominid model, dominated by “reactive” (or “hot”) aggression, to a more bonobo-like mastery of social adhesion and “coalitionary proactive” (cold, planned, coordinated) aggression. Including the deliberate murder of the most powerful non-conformists.

Fascinating as it is, the space given to all this is far greater than the space given to weighing just how decisive it is. Does it or doesn’t it refute competing ideas, for instance that our cool cooperativeness is just a by-product of a Pleistocene wetware upgrade?

And anyway, one might ask more subversively, from whose point of view are the “better angels” better? As Wrangham admits, our conquest of chimp-style reactive aggression is a decidedly two-edged sword:

“The impunity resulting from coalitionary proactive aggression, with its consequences that reach to obedience and sovereignty, has given successful individual humans powers beyond the imagination of nonhuman primates. To the powerless it has given unprecedented misery . . . [it] is responsible for execution, war, massacre, slavery, hazing, ritual sacrifice, torture, lynchings, gang wars, political purges, and similar abuses of power.”

Nietzsche famously derided our civilization’s values as a Christian slave morality, a successful re-branding of weakness as strength and of strength as evil. Whatever you think of that, Wrangham’s theory suggests, shockingly, that this turning of the moral tables happened far earlier, at the very birth of our species, a quarter of a million years ago.

As he is careful to make clear, this theory—that we owe our nature as a species to a taste for cooperative execution—has exactly no implications for the morality, now, of the death penalty. Among so many other things, our cooperative nature has given us locks, and votes, and other less bloody ways of removing the most violent troublemakers from the scene.