Goodbye, Sweet Girl: A Story of Domestic Violence and Survival 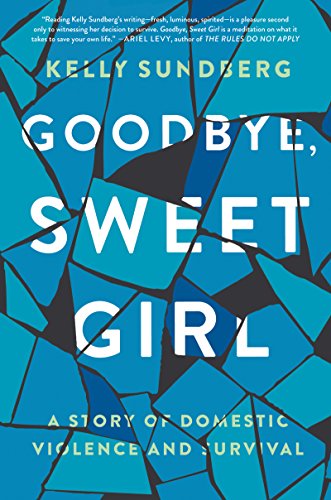 “Goodbye, Sweet Girl, bursting with such heartfelt, beautifully crafted scenes, is a gift for those who’ve experienced the pain of growing up and out of abusive relationships . . .”

The most recent data available from the CDC on domestic violence in the U.S. estimates that almost a third of women (and a quarter of men) experience physical violence from a partner in their lifetime.* There are now abundant resources on how to help someone leaving an abusive relationship to negotiate the complexities of emotional attachment, financial dependency, children and especially safety, yet still so few “insider” books that bear witness to the difficulty of letting go of everything—dreams and hopes, a current sense of identity, companionship, even love—to save oneself.  Kelly Sundberg’s Goodbye, Sweet Girl is one of those essential stories, told true and told well.

When Kelly, a 26-year-old student finishing her undergraduate degree at Boise State, discovers she’s pregnant, Caleb, her boyfriend of five months, wants to marry her. Despite her doubts, she “nodded, but felt no joy. Only fear.” We see this man as she does: someone who cooks for her, gives thoughtful gifts, tells her how smart and beautiful she is, apologizes, and seems “quieter, funnier, and kinder” than her previous boyfriend. We also see a man who responds to his wife’s emotional pain by repeatedly shouting at her to quit crying, a man whose rage-filled eruptions escalate over time.

In the book’s opening scene, Caleb chases her out of their college dorm apartment on the morning of their son’s seventh birthday, hurling obscenities as she begs student assistants to call the police, fearing what he might hurl next—objects, fists.

Then Sundberg takes us back in time, even to her childhood in rural, religious Salmon, Idaho, as she explores in luminous, aching language how the defiant, reactive girl she was becomes a longsuffering wife and mother then, finally, a wise and brave woman who is no longer always leaving but gone from that life that was spiraling down.

Observing her own son’s innocence, Sundberg writes, “I thought of myself as a little girl in Idaho, a sensitive little girl who witnessed the sadness of the adults around her, but who never imagined that her own future would contain so much heartbreak.” We experience the heartbreak with her and, knowing she has survived and thrived, wait breathlessly through the pages to find out how.

Sundberg doesn’t waste words trying to understand Caleb’s violent behavior; she is finally done making him the center of her world, and this is her story. She reflects instead on her struggle with fear and loneliness and rejection, taking inventory of the events and emotions that led her to stay and compelled her to leave.

She recognizes how her compassion for others, including her abusive husband, failed to extend to herself, and she teases out the emerging sense of anger that finally spurs her to action.

Sundberg illustrates it all through vivid scenes, never instructing from the perspective of an author already on the other side of an all-too-common experience, but opening her wounds on the page so the reader shares in her confusion, her dwindling sense of self, her earnest wish to make this marriage work even as she knows it can’t.

The book is about an abusive relationship, but that description fails to embrace everything else contained in this book that is about one woman’s life and also many women’s lives.

Goodbye, Sweet Girl is in many ways about anger: how men are still immediately forgiven for their inability to control it, how women are still expected to set their own aside to “fix” the problems associated with men’s toxic and mismanaged anger. And Kelly, like many women, is a fixer, unable for so long to recognize that fixing another person is impossible, that the effort will only break her.

One section of the book that especially resonates is when Kelly’s father tells her after she’s left her husband that he “just didn’t know what to believe.” She describes her father as a kind man and “the bravest person [she] knew,” someone with whom she shares a love for wilderness, with whom she went on backpacking trips before her marriage isolated her.

Victims of domestic violence often suffer the doubt of others, and the reader, having already seen such tenderness between daughter and father, feels, too, the stab of this betrayal. But Kelly’s father is not Caleb, and the scene of his response to her justified anger is touching, a relief from so much unrelieved pain in the book.

Goodbye, Sweet Girl, bursting with such heartfelt, beautifully crafted scenes, is a gift for those who’ve experienced the pain of growing up and out of abusive relationships and a guide for those who seek insight and understanding.