Goodbye to the Dead (Jonathan Stride) 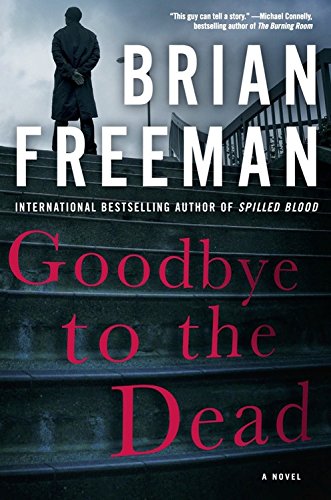 “Goodbye to the Dead is drop dead good.”

Brian Freeman’s novel, Goodbye to the Dead is well worth the read. His hero, Detective Jonathan Stride, wrestles with the loss of his wife Cindy to cancer and struggles with subsequent relationships that can’t seem to get off the ground.

The story is a little baffling at first when Freeman opens with a prologue set in current day, when Stride’s partner (both police and personal), Serena, enters a bar looking for Cat, the pregnant young woman who is living with them, and stumbles into a deadly shooting of a young, attractive girl obviously far from home.

Presumably, the purpose of the prologue is to introduce a high level of conflict and tension in the first few pages. Considering Freeman’s skill in writing scenes loaded with tension, the prologue could have been moved into the second part of the story and there would be less moving back and forth through time.

From the prologue, the story moves immediately to events a decade earlier when Stride’s wife, Cindy, was still alive. She and her friend, Dr. Janine Snow, leave a party, and Cindy drives Janine home. After Cindy leaves the house, Janine’s husband is murdered, and everyone except Cindy is convinced that Janine is the guilty party.

Freeman ramps up the action through a maze of twists and turns that keeps the reader turning the page. The story progresses through the inevitable search for evidence and the subsequent trial, when Janine is found guilty. Janine is sent to prison, and the story moves back to present day and a new set of crimes for Stride and his partner to solve.

In particular, the next story is about human trafficking, but takes an unexpected turn when the gun that was used to kill Janine’s husband nine years earlier is found to be the same gun used in the crime that occurred in the prologue. The two stories begin to fold into each other, and Freeman displays his skill at involving the reader in the labyrinth of clues and red herrings that he sets forth.

In one instance, a photo of a man with a gun in the woods raises questions about his possible involvement in the murder of Janine’s husband. He is discovered to be a disturbed young man who goes on a shooting rampage at a shopping mall where Cindy is caught in the crossfire. He is killed and subsequent evidence proves interesting.

Another foreshadowing involves Howard Marlowe, a man obsessed with Janine from her arrest through her trial. Freeman deftly casts Howard as a juror and although he is convinced by other jurors to cast his vote as “guilty” he doubts her guilt and spends the next decade tracing clues to prove her innocence. His obsession proves to be his undoing.

With the exception of the prologue, the story moves along with a smooth progression, intertwining one conflict with the next. At the end of the story, Freeman has tied up all the loose ends and brings the story to its logical conclusion.

This is a fast read and difficult to put down. In short, Goodbye to the Dead is drop dead good.