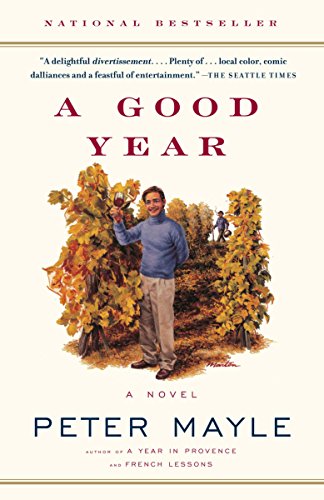 Peter Mayle is not only the master of a particular place—his stories are informed by experiences of his beloved Provence, located in the southeast of France, adjacent to the Mediterranean—but he has also established himself as the premier chronicler of that special place. His body of work, with a number of fictive place stories supplementing his nonfiction, establishes him as not only a leading storyteller—his publisher describes him as a “the writer with the claim to being the world’s foremost literary escape artist”—but also as highly knowledgeable about the role of place in contemporary society.

One can learn much about place by reading Peter Mayle and reflecting on his discussions of place. Peter Mayle’s place expertise is entertainingly demonstrated in Chasing Cezanne, an entertaining novel, published in 1997, that traces the escapades of “hanky-panky on the international arts scene.”

To convey the power of place branding—specifically the difference between living in a most prestigious place, as opposed to merely working there, or, far less preferably, working in a less desired place—he writes: “It was past four o’clock and on the icy muck of Park Avenue, 15 stories below, people battled for cabs. On Lexington, they would be waiting in sodden lines for busses. How agreeable it was to be warm and rich.”
Illustrating how people can be identified by their place choices, he observes, “They were sharing tariffs with a few other couples, who revealed their origins by their choice of tables: the locals in the shade, the northern sitting in full sun, making up for a long gray winter.”

Illuminating the powerful role of place as an identifier, especially the role of place positioning, at the more micro level, concerning the New York lunch Peter Mayle, explains, “The success of these establishments is based not on the quality of the cooking, which can often be excellent, but is largely unnoticed, but on the status reading of the clientele. After these fabulous creatures, the models, actors and writers of the moment, the cream of the media cream, the players alert to every nuance of the game—it is critical to be well placed. Exiled to an obscure table can turn the carpaccio of tuna to ashes in the mouth.

It seems that the law laid down by Birlette-Savarin has been rendered obsolete. “Tell me what you eat,” the great man would say, “and I would tell you what you are.” Those simple days are gone. “Tell me where you sit, and I will tell you who you are,” is a more appropriate model. And it can only be a matter of time before the special day is not a dish, but a celebrity—“the personnalité du jour whose presence in the restaurant is announced as discretely as the menu is delivered.”

A Good Year tells the story of an individual, forced out of his lucrative financial services job in London, who has inherited his uncle’s chateau in Provence. On arrival to inspect his new property, the protagonist learns that the house is very dilapidated and in much need of tender loving care. But the product of the vineyard is even worse. Ultimately, as with all “feel good, happy ending” reads, problems become opportunities, adversity is converted into good fortune, and the good guys prevail.

Peter Mayle stories are appealing not just because of the beautiful places he chronicles, but because his protagonists somehow are neither bothered nor constrained by the normal limitations of contemporary life. And, his protagonists never seem to be terribly concerned with the details of their circumstances and/or conundrums.

Although the protagonist of A Good Year has a financial background, he is conveniently casual in dealing with the fiscal details of his new property. The protagonist’s style mirrors the author’s style to gloss over the particulars or details, for there is always enough money; anyone whose financial resources may be limited have to be the beneficiary of some generously provided, perhaps without the need to ever ask, supplemental funds, by a long time friend or even a new acquaintance; and no real thought is applied to the cost of most things or even a most expensive bottle of wine.

In one telling exchange in A Good Year, Peter Mayle illuminates the distinction between an individual whose place is anchored and one whose place orientation is nomadic. As it turns out, the protagonist aspires to be anchored, seeking to move his life from the drabness, business, and dullness of London to the sunshine, relaxed pace, and sparkle of Provence. In response to a question as to whether he plans to stay in the place of his newly inherited property, he replies, “I hope so. I don’t know that I’ll be able to, but I’d love to. It suits me down here—the lack of pressure the little details of ordinary life, chance to spend so much of the year out of doors; even like the French . . .” Here, the protagonist conveys his inclination to be more outdoor than indoor and his intention to be anchored rather than nomadic.

In response to the same question about whether she would want to stay in the lovely French countryside, a woman from California, who it turns out is the daughter of the protagonist’s uncle, answers, “I’m not ready for that. There’s too much of the world I haven’t seen. You won’t believe this, but until a couple of years ago I was one of the 90% of the American population that doesn’t have a passport. You know, we travel, but we stay at home. I guess we miss a lot. London, Paris, Prague, Venice, Florence— you name it, I haven’t been there. I would really like to see as much as I can while I’m over here . . . But I’m not ready to settle down yet, and certainly not in France.”

Whereas a contemporary conventional page turner novel might devote no more than 20% or even less than 10% of its words to character and context, a Peter Mayle story flips the ratio, devoting the majority of attention, primarily, to the place, and, secondarily, to the characters: more specifically to the impact of how the place shapes the characters, between the extended, evocative, lovingly told stories featuring the details and aspects of the place story, Peter Mayle provides just enough tension to move the story along.
Peter Mayle lives what seems to be a fantasy life. In Chasing Cezanne he is described as an author who “divides his time between the south of France and Long Island.” Seven years later, by the time of publication of A Good Year, he has moved to Provence to enjoy the good life full time.