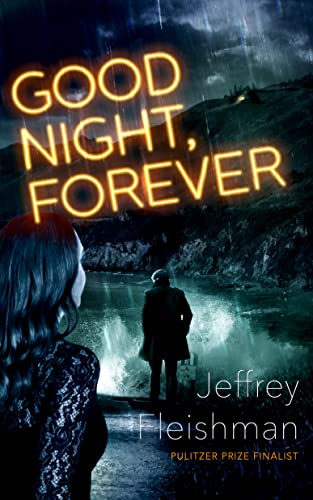 “It will be interesting to see where Fleishman goes with his future writings. His style, his vocabulary, and his ability to engage the reader leave no page unturned. His fans will expect another winner soon.”

In his new thriller, Good Night, Forever Jeffrey Fleishman once again takes the reader into the mind and soul of his protagonist, Detective Sam Carver.

The story opens with Carver returning to his home and his lover, Lily, only to discover police cars and ambulances scattered in front of his home with blue lights indicating trouble.

Lily has been murdered, and Carver is sure he knows who committed the crime—Dylan Cross, the woman who is his stalker. He cannot be part of the investigation because of his relationship with the victim, and he cannot convince Detective Alicia Bryant (the lead), nor his boss, Detective Ortiz, that Dylan is behind the murder.

And from this beginning, Fleishman gives Carver two crimes to solve, the attacks on the homeless, and Lily’s murder, because Carver is not about to let Dylan walk after killing Lily.

Fleishman moves these two investigations parallel with no distractions, taking the reader along for the ride and each new clue provides the reader with just enough information to begin a logical approach to the end of the story.

In his investigation of the homeless attacks, Carver follows clues about white supremacists taking their anger and hatred out on the homeless. He focuses on one particular group and a wealthy far-right extremist with a lot of money to spare. The clues lead him into the darkness of Nazis and extreme cult groups, but finding the right clues is more difficult than he initially believes. Fleishman’s creativity in finding the real culprit for the homeless attacks is not expected, but it is genius and it all makes sense.

All the while, Dylan taps Carver on his metaphorical shoulder just to let him know she is still around, she believes their future together is unfolding, and she isn’t going anywhere.

In a scene where Angel Castillo, the criminal first identified as Lily’s killer, is himself killed, Fleishman’s description, first of the worn-out apartment then of the dead man himself, is visual, bringing the reader directly into the scene:

“I follow Alicia Bryant . . . into a two-room apartment that was furnished in the 1930s. A dive . . . Worn-out lace curtains, overstuffed chairs, a foldout dining table near an open window with a fire escape. . . . Bryant nods to a syringe and a few packets of . . . heroin or meth on the floor. I step over them. Two shots to the chest. A nine-millimeter lies next to him. One shoe on, one shoe off. A man in a hurry. Surprise. Dead. Bleeding into an ancient carpet.”

Carver’s ultimate encounter with Dylan is rife with conflict and tension and an ending also not expected. His writing style with description is often lyrical.

We stare at each other. For so long, I have wanted her this close. But it is not the way I imagined. It has never been that way with Dylan. I granted her something long ago—absolution, perhaps. But no, she is a killer, avenger to the men who broke her, murderer of Lily. But she is other things, too, as am I. We are both more than we appear to be in our accumulated wreckage, and no, that is not enough, but it is what we bring to each other. “

It should be noted that Fleishman’s dialogue is genuine—never feels forced. It moves the story forward with pacing that is sometimes slow, sometimes fast but always informative and provides the reader with a clear understanding of each character. In Carver’s narrative, his short sentences, sometimes only one word, are filled with tension, and put the reader into Carver’s mind, sharing his thoughts.

It will be interesting to see where Fleishman goes with his future writings. His style, his vocabulary, and his ability to engage the reader leave no page unturned. His fans will expect another winner soon.