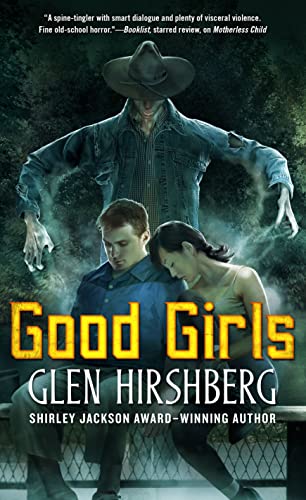 Good Girls is the second book in a trilogy that began with Motherless Child. The book continues the story of Jess, Benny, Baby Eddie, and Sophie, victims of a sadistic vampire called The Whistler, as they hide in a college town in New Hampshire and try to move on with their lives.

The reader is also introduced to a new main protagonist, Rebecca, a college student who watches Baby Eddie for Jess during the afternoons and at night volunteers at her former foster home, Halfmoon House, run by dysfunctional couple Joel and Amanda. Rebecca draws the attention of The Whistler as he’s stalking Jess and her family, which has consequences for Halfmoon House and Rebecca’s friends.

Large sections of the book also tell the story of Aunt Sally and her monsters in the swamps of the Mississippi Delta and her regrets and longing for her lost companion, Mother, who left with The Whistler and triggered the events of Motherless Child. These chapters seem loosely related to the main story line, meant only to set up context for the next novel and tie the trilogy together.

Aunt Sally’s chapters were also some of the most enjoyable and emotional. Her bored, almost depressed indifference toward those around her now that Mother is gone, leads to further events that were some of the most emotionally compelling of the novel, almost to the point where Aunt Sally’s story could have been an entirely separate novella, complete on its own.

Hirshberg is able to pack a ton of tension into this book surrounding the primary characters, specifically with Rebecca and her relationship with Halfmoon House, and Jess and her family. Rebecca’s love and resentment toward her foster mother, pure adoration and pity for her foster father, and growing feelings for Jess and her family, are a juxtaposition of emotions that are three dimensional on the page and add another layer of tension to the main conflict.

In general, the relationships between the characters are genuine and nuanced, marked by flaws and prejudices without coming off as the least bit clichéd. In fact, one of Hirshberg’s strengths is avoiding character tropes and creating protagonists that are both strong and human. Normal, flawed, everyday people, not just hulking superheroes in black leather, battle the forces of darkness in Hirshberg’s books.

The Whistler, as the main antagonist, feels a bit like a boogeyman character with little motivation. His desire for revenge against Jess and her family is understood, but his immediate fixation with Rebecca and almost offhand way he kills those around her feels too convenient. His character is savage, without moral compass. Understanding his actions is easy; however, his desire for death and pain is almost clichéd.

Hirshberg creates a parallel alternative to that savagery with Aunt Sally, who sets out her own set of commandments—rules called “Policy”—to rein in her monsters and herself. Her character is so much more nuanced and developed that it further amplifies the lack of developed motivation in The Whistler. He has no rules and seems to be driven by instinct alone to make those around Rebecca and Jess suffer. He starts to build up a body count that would be devastating if only the characters dying were people that the reader actually cared about.

Most of the novel is packed with long paragraphs of narration and exposition, which is redeemed in a large part because Hirshberg’s prose is so well written and his protagonists interesting and relatable. His descriptions of the characters’ emotions, combined with his ability to set the scene, creates a texture in the writing that can be felt, sometimes tasted and smelled in the case of the Aunt Sally chapters.

The novel is short, the main timeline occurring over just one day, but the slow pacing makes Good Girls feel much longer. The intensity is right at hand, but at times the tension becomes tiresome, and there’s not enough action keeping the plot moving at a satisfying pace.

Overall, readers who enjoyed Motherless Child would appreciate this sequel, which is more of a bridge novel between the first and third book. Although Good Girls is marketed as a standalone, it really should be read as part of the series. Hirshberg is not wasteful with his words, so those who haven’t read the first book would feel lost jumping in to Jess, Benny, and Sophie’s story line, right into the carnage and conflict, with limited explanation about the events of the previous novel and their past with The Whistler. Good Girls feels like a more complete ending to Motherless Child rather than a true standalone that can be fully enjoyed separately from the trilogy as a whole.