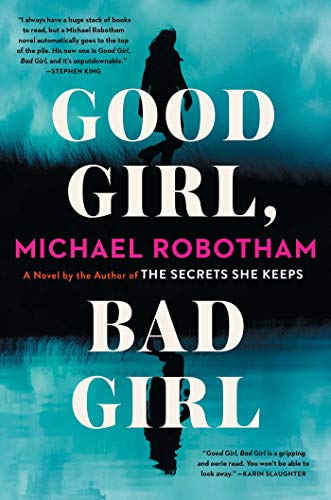 “Good Girl, Bad Girl is an impeccable thriller with a plot that encompasses murder, incest, drugs, abuse, torture, sex—you name it, this book has it.”

Michael Robotham’s novel Good Girl, Bad Girl will uproot your preconceptions about the meaning of “good” and “bad” and scatter them to the winds.

Cyrus has been asked to evaluate Evie, who wants to leave the high security children’s home where she has been confined since breaking someone’s jaw with a half brick. When the court’s decision goes against her, Cyrus intuits Evie’s fury and offers his services as a foster carer. Thus begins one of the greatest aspects of Good Girl, Bad Girl, the burgeoning mutual trust and beautifully depicted development of this relationship.

It is an unlikely pairing, but they do share certain commonalities. First, there are horrific tragedies in both their pasts. Second, they share different abilities to see inside the human mind. Cyrus’ job involves observing people and reaching conclusions about them. While Cyrus’ skill is learned, Evie’s uncanny gift (or curse, as she calls it) informs her when someone is lying. Apart from being a useful skill when gambling, its benefits in murder investigations are obvious.

Yet this potential superpower plays a disappointingly minor role in the solving of Jodie Sheehan’s murder. Cyrus’ initial skepticism about her ability: “Evie Cormac is too young to be a truth wizard. . . . She’s a very clever, manipulative teenager,” changes to absolute conviction by the end: “If others discover what Evie can do . . . the questions, experiments, and clinical trials will never stop.” Yet there is no satisfying scene where Evie dramatically proves her skill and changes his mind.

There is a suggestion that Evie’s gift played a role in the calamitous past that has decimated her trust in others and her self-esteem—“I’m the problem. I’m worthless, detestable, a receptacle for refuse, a sewer, a punching bag . . .” Jodie Sheehan’s gift, on the other hand, propelled her to stardom as the British Junior Champion with rosy expectations of an Olympic future . . . until she was murdered.

As the complete picture of Jodie’s final hours are mapped out, a satisfying array of suspects and red herrings traipse across the pages. Jodie herself emerges as a girl with secrets, who is perhaps not the lily-white victim we imagined her to be. The possibility of sexual exploitation is linked to almost every male suspect throughout the mounting tension of the story, until the rip-roaring climax that blows every previous assumption out of the water. Cyrus is present for every turn and twist of the plot, and Evie also plays a vital (though obviously unofficial) role as the action hones in on the killer.

Good Girl, Bad Girl is an impeccable thriller with a plot that encompasses murder, incest, drugs, abuse, torture, sex—you name it, this book has it. Yet there is still time for the unhurried exploration of two unique, damaged characters. The realism of their interaction, the growth of mutual trust and love, and the resulting relationship is handled delicately and believably. Evie’s metamorphosis from a distrustful, disturbed kid in and out of foster homes and institutions, described as “Antisocial. Aggressive . . . a danger to herself and others,” to someone who has opened her armor a chink to let Cyrus in, is utterly convincing.