For the Good of the Game: The Inside Story of the Surprising and Dramatic Transformation of Major League Baseball 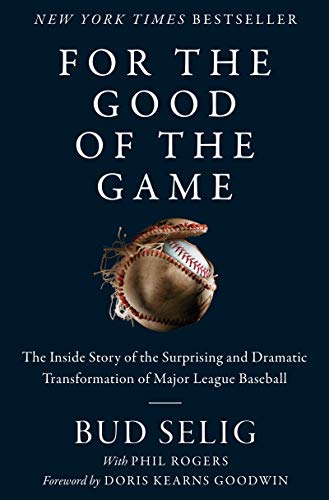 "Selig has also given us a book that captures his love for the game. There is goodness here, a transforming goodness."

Two names on the cover of a book can mean either a double-play or a pinch hitter. Bud Selig tells his story with help from Phil Rogers. Rogers is the author of Ernie Banks: Mr. Cub and the Summer of ’69. If everyone loved Ernie Banks then Bud Selig is a person who wants to be respected if not also loved. Who wouldn’t want Bud for a buddy?

If there is a purpose or a motive behind writing this book it’s to remind history that Bud Selig was a visionary during a time when others were politically blindfolded. Selig was the ninth commissioner of baseball. He was inducted into the Hall of Fame in Cooperstown on July 30, 2017. He was baseball commissioner during a time when one might have prayed for a rain delay. Selig’s name will always be associated with the steroids era in baseball and the missing World Series of 1994.

The title of Selig’s book comes from a conversation he once had with his mentor John Fetzer. Feltzer, who at the time was the owner of the Detroit Tigers, always did what he felt was in the best interest of baseball and not simply his Tigers.

For The Good of the Game is the baseball book written not from the perspective of someone sitting in the stands or dugout but from the owner’s box. Before becoming commissioner Selig was the owner of the Milwaukee Brewers. He was the key individual responsible for bringing baseball back to the city of Milwaukee after the Braves left to relocate in Atlanta.

How Selig’s childhood love for a game resulted in him becoming an owner is what makes this book an interesting read. Baseball management however could be viewed as nothing more than a rich club with folks knowing one another and doing business that extend networking connections to friends and family members. Is one surprised when Bud Selig one day turns over the operations of the Milwaukee Brewers to his daughter Wendy? Not really. For The Good of the Game is about labor conflicts. It’s about the ongoing battle between players and owners. At times the problems documented by Selig in his book are not good for the game.

The game of baseball is where America dreams. How the nation deals with race, for example, can be told through the history of baseball. Selig as a child is a witness to one of Jackie Robinson’s first games. This memory and its significance is what perhaps paves the way for his life-long friendship with baseball great Hank Aaron.

For The Good of the Game begins in 2007 with Barry Bonds closing in on the all-time home run record set by Aaron. To Selig, Aaron represented all that was good in baseball and now his record was being broken by someone who was accused of using steroids. Selig’s does not hide his disgust. It’s interesting he would begin his memoir talking about Bonds because this entire book is about Selig’s reputation being tarnished by players who did not honor the game. Selig names names in his book. He creates two teams. Players he admired like Paul Molitor and Robin Yount (who happened to play for the Brewers) and then the cheaters like Pete Rose and Sammy Sosa who lied about betting and drugs to the fans and owners. How could they do this? For Selig baseball was a sacred game.

“Baseball was the language spoken in the house I grew up in, on Fifty-second Street in Milwaukee. I was the second son of immigrants, but we were a first-generation family of baseball fanatics, in particular my mother and me. “

It’s fascinating to see how Selig’s father’s success in auto dealership opens the door for his son eventually having the capital to help purchase a team. As Selig tells his business success story he also explains the concerns small cities have in competing with teams in larger cities and bigger markets. Selig has the vision to see that what would be best for baseball would be revenue sharing among clubs.

Selig’s book reveals the personality and interests of many of the baseball owners. Some of them are only interested in what’s good for their team. Selig in his book often compares major league baseball with the National Football league. Why is

one sport more successful than the other, and shouldn’t baseball be held to a higher standard? This belief is the moral compass at the center of Selig’s book.

Before major league baseball had a steroid problem (around 2002) it had a problem with players using cocaine. According to Selig the failure to handle the drug issue would result in the major leagues not being prepared for the steroid era. At the center of the fight between players and owners would be drug testing and the concerns with privacy.

“In so many ways, the cocaine abuse during the 1980s foreshadowed the later issues we’d confront around performance-enhancing drugs. Both the arbitrator’s ruling and the union’s refusal to budge on the issue laid the groundwork that allowed for the growth of steroid use a decade later.

“As dangerous as it was, baseball’s problems with drugs was only beginning. This initial stonewalling of drug testing meant there was no accountability for players using drugs of any kind, leaving us no way to combat the burgeoning science behind anabolic steroids, human growth hormone, and other performance-enhancing drugs that would become all too apparent in the years ahead. No one seemed to truly understand the stakes here—whether it was the risks to the league, to the union, or to the players themselves.”

Bud Selig’s book is not about drug despair. It’s instead an insider’s look at what makes the game of baseball so amazing and joyful to watch. It’s a game that upholds tradition but must continue to attract fans and revenue. Selig understood the need for baseball to change. He was skillful enough to change it.

There were moments during his career when he was booed for the positions he took; yet each year we celebrate the expanded postseason, the replay review, the honoring of Jackie Robinson’s memory with the retiring of his number 42. One must thank Selig for these things.

Selig has also given us a book that captures his love for the game. There is goodness here, a transforming goodness.