The Good Doctor of Warsaw 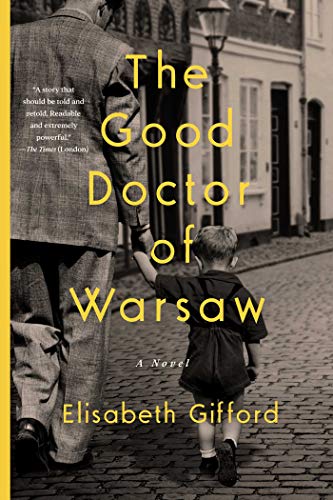 "chilling depictions of prewar naivete, the slowly tightening noose in the ghetto, and a murderous eruption of anti-Semitism in Ukraine”

In the early 20th century, the Polish pediatrician Janusz Korczak became known worldwide for his revolutionary theories about humane child-rearing. As he wrote, “children are not future people, because they are people already,” and therefore they “must be respected and loved, treated as partners and friends.”

The Holocaust catapulted him into a legend. For nearly three years, “Pan Doctor” ran an orphanage in the Warsaw ghetto, creating a small haven for his approximately 250 Jewish charges. Spurning offers of escape for himself, he stayed with the children as they were herded to their death in the Treblinka gas chamber.

British journalist Elisabeth Gifford originally set out to write a biography of Dr. Korczak. She decided to flesh it out into a novel, focusing on the romance between one of the teachers at the orphanage, Misha Wasserman, and another Jewish teacher in Warsaw, Sophia Rozental—both of them actual figures.

As is often the case where the author is (understandably) a bit in love with her heroic historical subjects, The Good Doctor of Warsaw turns its main characters into saints too noble to be true. Still, it’s a highly readable and engrossing narrative, with chilling depictions of prewar naivete, the slowly tightening noose in the ghetto, and a murderous eruption of anti-Semitism in Ukraine.

In one of the most powerful scenes, Misha arrives at the outskirts of Warsaw with the Russian army in January 1945, ready to liberate the city from German control. He is horrified to see “charred ruins, stumps of buildings like gravestones in the toneless light.”

Misha and Sophia had managed to slip out of Warsaw during the early days after the September 1939 German invasion, before the ghetto was walled in, with Sophia idealistically still thinking she can finish her university studies in Lvov, Ukraine. When the anti-Semitism there becomes too dangerous, the couple actually returns to Warsaw and voluntarily enters the ghetto, to the amazement of the guards, in order to reunite with Sophia’s family.

Some of the best parts of this book are the examples of Dr. Korczak’s methodology. For instance, when an extraordinarily shy little girl, Halinka, still hasn’t talked to anyone or made any friends after three months at the orphanage, Dr. Korczak places her “on top of the big cupboard in the library and walked off.” The astounded other children debate how to rescue her. Finally, one tall boy lifts her down, and Halinka “goes off surrounded by a gaggle of clucking nurses and friends.”

But that bit of psychological nudging isn’t the end of the incident. Now, “Pan Doctor has to go in front of the children’s court for putting a child on top of the cupboard.” As Dr. Korczak points out, “Same rules for everyone . . . You must give me the same punishment that you would give to any child if they did such a thing.”

With scenes like that, Gifford didn’t need Misha and Sophia to turn Dr. Korczak’s story into a compelling novel.