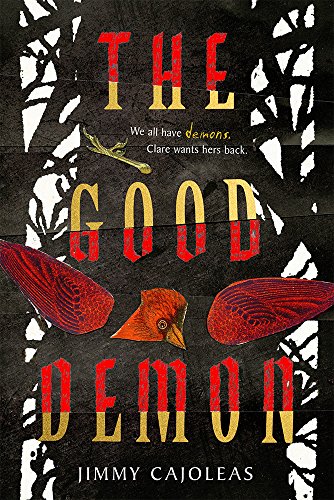 “In a horrifyingly paranormal way, this is a coming of age story.”

Only a month before, Clare lost her best friend.

Clare’s home life wasn’t all that great. Then her father overdosed and her mom remarried. Her school thinks her a “problem student” because occasionally she says odd things or acts in frightening ways. They don’t know it was because Clare’s friend, a demon called She, occasionally takes over her body. As a result, the other kids think her weird, and her parents fear she’s mentally disturbed.

Just because she had a demon for a best friend. A demon no one but Clare could see or hear.

When her stepfather appeals to the Reverend Sanders for help, that’s when it ends. With the aid of his teenage son, Roy, the reverend, performs an exorcism, a deliverance from evil, and Clare’s friend flees.

A month later, guess who shows up at Clara’s home? Roy. Offering some kind of apology, seeking forgiveness, definitely holding out a hand of friendship.

Clare remembers She had once given her a cryptic message “Be nice to him. June 20. Remember the stories.” Could “him” be Roy? If so, what do the other parts of the message mean?

“He was probably the most naïve person on earth. It was almost endearing.”

Naïve or not, message or not, Roy and Clare become friends, though they have to keep it quiet because of Roy’s dad. Roy has an interest in some of the same things as Clare, esoteric things. Occasionally he questions what he’s been taught, but he can never admit it to his father. He and Clare become close, eventually lovers.

Then Clare meets Miss Mathis, who may be a witch, or perhaps she’s only a con artist pretending to be a fortuneteller. Miss Mathis was friends with Cléa, daughter of the man who owns Uncle Mike’s Used and Collectibles, where Clare gets her books, and she sees in Clare some of the same traits that may have caused Cléa’s disappearance. She also knows there are people in town, a secret gathering, who are a danger to Clare, just as they were to others teens who disappeared after meeting She.

“A meadow on top of a mountain overlooking the sea, as real to me as anywhere in the world, realer even. It was in the Hidden place She would reveal herself to me. It’s just for you and me, She said. No one else can come here.”

It’s in the Hidden Place that the man called Gaspar lives. There are dangers inside the Hidden Place, dangers not only to Clare, but also to Roy. Answers, as well. Of what happened to Cléa, and also what is coming on June 20, and what Gaspar wants.

When Clare decides to search for her demon, Roy comes along. Whether he actually believes all she has told him, he’s there for her.

“I’d spent a month thinking of Roy as my enemy, some brainwashed, joy-robbing minion of evil. It was amazing to think he was awful close to becoming my only friend.”

What they discover in the Hidden Place will be a shock to Roy’s beliefs as well as Clare’s, for no one is what they seem, not Miss Mathis, not Gaspar, and especially not She. Clare will have to choose between the supernatural entity whose abandonment has fragmented her world or the living friend Her’s absence brought into her life.

In a horrifyingly paranormal way, this is a coming of age story.

Clare is the most alienated of teens, suffering not only the angst of adolescence but also the separation from reality brought about by first her father’s death, next Her’s presence, then departure. Told from Clare’s point of view, she gives the reader insights into life with Her, of how and when the demon appeared to a lonely child, using the guise of being a child itself, omitting the real reason for choosing Clare until they’re once again reunited in the Hidden Place.

Roy’s intrusion into Clare’s life offers a bit of normalcy, for, in spite of his biblical upbringing, he’s as curious as she, and also sympathetic, and appears to be the only one other than his father truly believing in her demon.

Those romantics among the readers, those liking a Happily Ever After ending, may be disappointed in the outcome of Clare’s “romance” with Roy, though it’s realized that since he’s legally still under parental authority, he has to obey his father, even when it’s obvious he doesn’t want to.

Nevertheless, there’s some happiness in the outcome. Clare loses some things but gains more important ones. All will recognize the bittersweet satisfaction in the way her story ends. Or perhaps it’s just the beginning.