The Good Assassin: How a Mossad Agent and a Band of Survivors Hunted Down the Butcher of Latvia 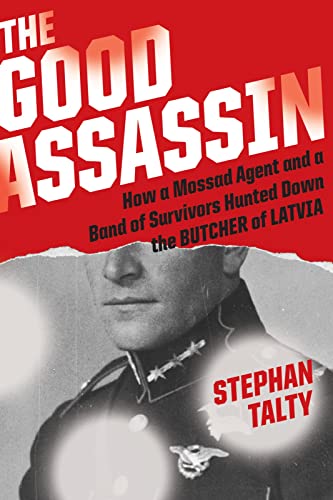 “Justice, even decades later, should send a message that these are crimes for which atonement must be paid in full.”

It is always gratifying when the perpetrator gets his just due even if things don’t go exactly to plan. When it comes to pursuing, tracking down, and rendering justice to those who participated in the Holocaust, it can sometimes be a life-long endeavor for those with the will, determination and commitment. Not surprisingly, those of the Jewish faith almost invariably meet those requirements. If they have anything to say about it, they will never forget.

This publication is really a three-part story. It not only tells the tale of the undercover operation to bring to justice Herbert Cuckurs, the so-called, self-styled Latvian Charles Lindbergh aviation hero, but also details his murderous activities in 1941 in the wake of Operation Barbarossa, the German invasion of Russia, as well as those relative few who survived the war in order to enlighten the world as to Cuckurs’ actions, and others, who collaborated with the Germans.

Cuckurs was the Latvian national hero whose aviation exploits in the 1930s brought him much celebrity and adoration. His books and lectures kept him constantly in the public eye. He seemed to have everything going his way, so it was rather surprising that he could have ended up in a Latvian militia-type unit, prepared to aid the Nazis in clearing the landscape of Jews.

The Mossad, Israel’s black ops organization, was at the forefront of many of the efforts to track down these killers and organizers of wartime atrocities. Its most well-known exploit, of course, was the 1962 kidnapping of Final Solution architect/facilitator, Adolf Eichmann, resulting in his trial and subsequent execution.

A Mossad team was organized and tasked with a plan to eliminate Cukurs in 1965 just prior to a German legislative debate on granting amnesty to virtually all as-yet unprosecuted Germans believed to have participated in wartime atrocities.

In the wake of the Soviet occupation of Latvia and the subsequent German invasion, many people were caught in the middle trying to avoid one or the other yet still survive. Being a collaborator for either could be a one-way ticket to prison, the Gulag, or a bullet to the head. It is believed that Cukurs took advantage of an opportunity to ingratiate himself with the Germans and prove himself by participating in Jewish ghetto clearing and numerous death actions.

Strangely enough, one of those who survived, Zelma Shepshelovich, among others referenced in the text, did so among Cukurs and his Latvian cronies despite having identified herself as a Jew, although it did not prevent her from being raped. It is she who came forward decades later and provided much of the postwar information and details about Cuckurs’ activities.

As with many Nazis and other wartime atrocity perpetrators, Cukurs made his way to South America where he lived and ran various small businesses to keep body and soul together. However, living under his own name eventually brought him to the attention of Jews there, and his businesses weren’t as prosperous as they could have been. Consequently, he yearned for the celebrity of his earlier aviation exploits, and that is how he ultimately fell into the Mossad’s trap.

As mentioned above, the operation’s execution did not go according to plan, but it did have a positive effect on the German legislative debate just a few months later, forcing many fugitive Nazis to continue to keep their heads down in the long term.

This is written in a style, at times, with dialogue, almost like a novel and contains much background information on Cukurs’ life as well as the wartime and postwar trials and tribulations of the other personages who survived and figure in this story.

The author’s footnotes tend to be relatively few for each chapter and are generally tied to a quote or other indicator on a specific page. His sources run the gamut from Israeli and German documents, articles and newspapers to interviews with survivors and/or their children.

Justice delayed is said to be justice denied. However, there should never be a statute of limitations on murder, genocide or any inhuman acts, for that matter as was indicated by the German government in 1965. Justice, even decades later, should send a message that these are crimes for which atonement must be paid in full.