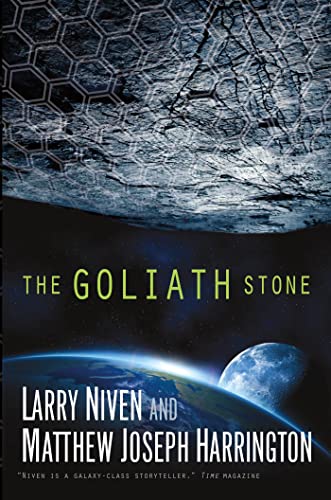 “The Goliath Stone is brain candy, a fast read, and surely a sci-fi fan pleaser. Good for the beach or the hammock.”

Written by the much-loved and much-awarded Larry Niven (Hugo and Nebula prizes for Ringworld), along with Matthew Harrington, this novel follows Mr. Niven’s penchant for hard science fiction that builds on grand science concepts and physical theory. Mixed in with this title are adventure and detective fiction genres as well.

This story focuses on nanotechnology, which in due course inadvertently turns the hero and heroine into a new, non-human species. Not that it matters to the plot because the action centers on the nanites themselves, intelligent microscopic robots, who, in a familiar trope of sci-fi literature, transcend their programing and begin to do their own thing.

What they think is best of course collides with another familiar trope, the eternal stupidity of government and its military branch whose instinct is to destroy whatever it cannot understand. “Your project ate our launch vehicle after launch. Ate it.”

Part of science fiction’s pleasure is that it is, in fact, grounded in familiar elements of genre. Which is not to say that it isn’t intellectual, not at all, only that it isn’t terribly literary. Don’t look for well-drawn characters or subtlety; this novel is driven by plot. Be prepared to be told rather than shown, and to believe that emotion is conveyed by wide-eyed stares, slapping one’s forehead, and biting one’s lip.

When Nobel Laureate Doris Lessing wrote her five volume sci-fi series Shikasta she was roundly criticized by the literary establishment for deigning to dabble in a low popular form.

Of course, they missed the point.

Lessing’s reply was that there was nothing wrong with the science fiction form; if critics found it lacking it was only because more literary writers such as herself hadn’t tried their hand at it. If they would perhaps they’d discover it isn’t so easy.

The Goliath Stone is foremost a novel of big ideas, and therein lies its pleasure. It explains why it is a page-turner (I read it in two sittings, which I intend as a compliment).

A potpourri of topical subjects it includes are terrorism and “the jihad threat.” We encounter a drug addicted U.S. President. We learn through exposition such interesting things as the social hierarchy of prison inmates who are rapists, and of time travel—not for the H. G. Wells fun of it—but for the express purpose of manipulating history so that a list of bad things from the present point of view will never happen.

A strong sub-theme is the treatment of women as property, which, to the nanite inventor, “was a death sentence from which there was no appeal.” The authors handle it not as politically correct feminism but as an issue of human rights.

The book starts with a four-page synopsis of “cast and crew” ranging from Tom Swift to a former prostitute now serving as an “agent provocateuse.” But sex is incidental in this story, and sexual interest is conveyed through sophomoric double entendre.

Metafiction, on the other hand, abounds in the ton of references sprinkled throughout—some obvious, others oblique—cultural, film, religious, historical, sci-fi stories, sci-fi authors. Those in the know will nod and smile; those in the dark will wonder what purpose dozens of such allusions serve. Perhaps they are only there for the sake of a puzzle, a literary Sodoku.

By the end, the protagonists sound ironically world weary even as they’re on a tear to save the world. Many targets come in for sardonic digs. Of the French: “I blame the wine and cheese. Always be suspicious of a culture whose cuisine is based on ingredients with no expiration date.” Of the government: “A bunch of bureaucrats with guns went into a panic and decided to find someone to blame for their hysteria.”

The Goliath Stone is brain candy, a fast read, and surely a sci-fi fan pleaser. Good for the beach or the hammock.