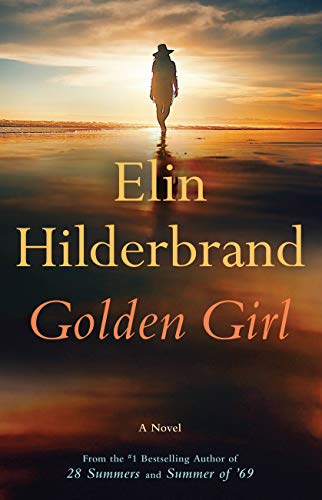 “Complex and moving, this read will get one thinking.”

Vivian Howe lives on Nantucket Island and is the mother of three; the oldest, Willa is married to Rip Bonham, her childhood sweetheart with whom she is desperately trying to conceive after suffering three miscarriages; middle daughter Carson is the wild offspring who tends bar at Oystercatcher, a local restaurant; and son, Leo, a recent high school graduate who is bound for college in Colorado.

The author of 13 novels, 51-year-old Vivi finds her popularity is growing rapidly with the beach reads she pens set on her home turf containing bits of her personal history.

Ten years ago, her husband, JP Quinboro shocked her stating he wasn't happy and had fallen in love with Amy Van Pelt his 26-year-old wine shop employee. At this point, Vivi takes his rejection in stride realizing he's a spoiled rich native who cannot make a success of anything. She is enjoying her life, loves the place she calls home, and the closeness she shares with her best friend, Savannah Hamilton, her Duke college roommate, from a family with roots in Nantucket.

On a glorious day in June to clear her head and contemplate her earlier argument with Carson and other problems concerning her children, she goes for a jog and is run down near her home, with the driver leaving the scene. As she lies dying, she is filled with intense memories of her high school boyfriend, Brett Caspian as he sings a tune he once wrote for her.

Leo's close friend, Cruz DeSantis, arrives soon after Vivi is hit. He loves Vivi as his mom, for she always treated him like her own son. Raised by his dad, Vivi is the only mother figure he's known. Distraught when Vivi succumbs to the accident, Cruz is shocked when Police Chief Ed Kapenash considers him the key suspect in her death.

Just prior to Vivi's demist a woman named Martha circles the island taking in the sights, sighing over the beauty of the area. But, she isn't there to sightsee . . . she's there to collect—none other than Vivi!

As Vivi lies dying she spots a woman sporting reading glasses perched on the end of her nose:

"Whereas the scarf [she is wearing] is elegant and looks expensive—Vivi studies the elaborate animal print in the signature shade of orange and determines it's (excuse me!) an Hermès scarf—the glasses are of the drugstore variety. 'Hello, Vivian,' the woman says. 'Welcome to the Beyond. I'm Martha.'

"'You have got to be joking! You're Maribeth Schumacher's sister?' When Vivi's first novel, The Dune Daughters, came out, Maribeth Schumacher bought twenty copies and gave them to all her influential friends. These friends then told their friends and neighbors and sisters-in-law and so on and so on and so on—just like the infamous Fabergé shampoo commercial. In this way, Vivi's devoted readership was born. . . . .

"'I think there's been a mistake.'

"'I'm dead,' Vivi says. 'But I didn't do anything wrong. How can I be dead?' She doesn't want to sound too indignant; if there's one thing Vivi has learned in her fifty-one years, it's that you should always be polite to the people who can help you, such as flight attendants and anyone who works at the DMV. 'Martha, can you explain, please? Am I being . . . punished?'

Martha cannot or will not disclose the name of the driver who killed Vivi, but she informs her she is being granted the summer to watch over her children and is allotted three "nudges" where she can intercede in certain circumstances and help them. These nudges are offered because she "met such a random and sudden end." Martha adds it's also because she likes Vivi's books.

Martha presents as an eclectic woman who wears different expensive scarves whenever she connects with Vivi; usually when Vivi needs her help. She takes Vivi to a room decorated how Vivi would love to do with the house she bought after splitting with JP that she calls "Money Pit." Now she automatically is comfortable in this new environment.

As Vivi rises to the Beyond, she ponders her life. Not realizing she is deceased, she thinks about her latest novel, Golden Girl, which is due to be released in a few days. Her biggest dream is to reach the top spot on the New York Times bestseller list. Coming close, she's never reached number one. This new book going back to Vivi's early years is mostly fictionalized, for she hasn't thought about Brett in years and never spoke of him to Savannah or her family.

Vivi can now face her children's problems and use her "nudges" to help. She saves Carson from a situation that could be devastating, seeing Carson is floundering and on the road to destruction. Other things come to light for all concerned as horror and heartache consumes those closest to Vivi.

A bit romance, a bit mystery, Golden Girl captures the charm of Nantucket. The island with the local spots and areas are described so one feels part of the locale; though, this could be considered overkill with the flow of the narrative by slowing down the progression of the story. It depends on the reader's likes and dislikes. Some love to have every nook and cranny depicted, and others look for a quick read.

Though labeled a "beach book" Golden Girl is much more. It is not fast paced, but is intense, with both depiction of the location and the awareness of each of the various and divergent characters who give their insight of their experiences in their own chapters. It also offers food for thought about what could happen once one dies. Can we get a second chance to work out difficulties and/or help others? Complex and moving, this read will get one thinking.