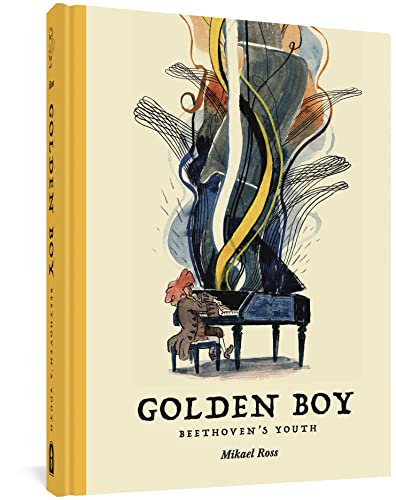 Ludwig van Beethoven was a German composer and pianist born in Bonn. Spanning the late 19th and early 20th centuries, he remains one of the most admired composers in the history of Western music. His works rank among the most performed of the classical music repertoire and span the transition from the Classical period to the Romantic era. His popular “Ninth Symphony” continues to be sung and played all over the world.

The cover shows a rainbow of warm and cool colors emanating from the piano as Beethoven is playing. This rainbow emanates throughout the book. The fiery colors imply that music is everywhere and not only in a concert hall. This is the main theme throughout this book. "Isn't music like an enormous river?"

In 1778, the Beethoven family has a difficult life in Bonn. Beethoven suffers as a child, living with an alcoholic father, who refuses to allow him to play his own compositions. He wants him to play Mozart only. "Can I take lessons from Mr. Pfeiffer, Papa?" "I will not hear that name in my house ever again." Beethoven, however, is close to his mother who encourages him and nurses him back to health when he's sick. "I have new music, Mama. Do you want to hear it?" "Yes, play it for us?" There is no money to buy the basic necessities because his father spends it on alcohol. His son's piano playing is the only way out of his debt.

There are many days when Beethoven is locked out of his house and has to sleep in the rain on the street. He's insulted and beaten by his friends. "Go on, take a bow, mutton-head." At seven he's already writing his own compositions. But his father roughs him up because he disapproves. He wants him to play only Mozart.

At 26 years of age, Beethoven contracts smallpox and, it is believed that this illness may have caused his deafness. "Everything sounds so far away . . . Something's wrong with my ears." "AAAAH, OOOOOOHHH . . . too much music." However, he continues to compose even when deaf. He had heard and written so many pieces of music when his hearing was normal that he's able to feel the vibrations of his hands on the piano keys.

When Beethoven plays piano, he asks his audience to close their eyes and listen to the wind and spirit of the music. This idea is illustrated by the colors and swaying of the trees and branches. Beethoven's dream is to study with Mozart and, in 1786, he makes his way to Vienna. His advice from his friends: "In Vienna, stay away from two things: from the whores and from the funerals." He tries to find Mozart's house but is frustrated along the way. Finally, he arrives at a house but there's no answer. He has diarrhea and has to go. An unfriendly, overweight woman offers him a barrel in which to defecate and then steals all his money. "I've—I’ve been robbed . . . With the address of Frau Willman, my hostess" in my hand.

Beethoven finally meets Herr Mozart who makes fun of him:"Pssh . . . young people today. One can't defecate without harassment . . . ass-flea." But Beethoven is sick with diarrhea and keeps  trying to hold up his pants in public.

Ludwig eventually learns that his mother is dying and returns to Bonn. The landlord tells him that his father will be evicted if he doesn't pay rent. Ludwig says that he will earn money for his compositions. "Don't worry. I've composed something for a count. He'll surely pay me this evening." But, alas, another composer steals his composition and plays it in front of the count. He mees Haydn who tells him how to write music: "In music, impact comes from steady improvement, pruning, intensifying, through intelligence, sensitivity."

Eventually Beethoven performs his own composition in a concert hall in Vienna in front of Haydn and the audience gives him a standing ovation.

The bathroom language and vulgarity throughout this book may offend some readers and may not be suitable for young children. "Ludwig van shitoven . . . Your father's a loaf-eater at the shithouse." Beethoven sitting on a barrel, defecating and then pulling up his pants in public. However, the author does give a clear picture of Beethoven's childhood struggle with poverty, an alcoholic father, and abuse, using clear, stark, colorful graphics and cartoon caricatures. Golden Boy: Beethoven's Youth will inspire readers to find out more about this great composer's life.