The Golden Age of Science Fiction: A Journey into Space with 1950s Radio, TV, Films, Comics and Books 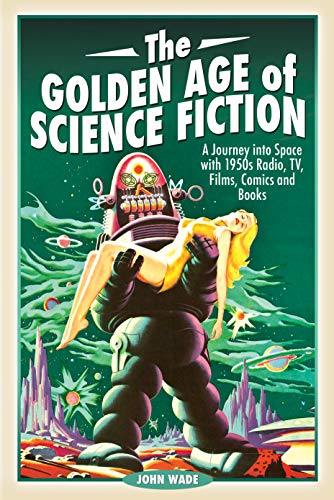 “grab your secret decoder ring and your blaster, strap yourself in for liftoff, and enjoy. . . . The pictures in this book are reason enough to buy it.”

The pictures in this book are reason enough to buy it—90 color and 30 black-and-white illustrations that gorgeously chronicle the rise, apogee, and decline of popular science fiction during the 1950s. Author John Wade, a British freelance writer and photographer with decades of experience in both, has put out not only a well–researched book grounded in hundreds of sources, but also an unmistakable labor of love.

Any reader slightly bitten by the sci-fi bug will find much to enjoy in these pages. An Englishman with more than 30 books to his credit, the author first focuses on the early years of radio and TV in Britain. America “had already broadcast most of its better-known science fiction dramas” such as Buck Rogers, Superman, Flash Gordon. On the radio, Superman lasted from 1940 until 1952, and the 600 episodes of The Shadow from 1937 to 1954.

Wade quickly dispatches arguments that science fiction automatically signifies a “B picture” either now or at the time of its release. He frames his approach to the genre as “the time when you personally first discovered” it. This makes the book especially appealing to Boomers who grew up in the 1950s age of nuclear anxiety. It evokes nostalgia, too, besides being beautifully printed on glossy stock. Nearly all the illustrations are full page, and the colors of movie posters and comic covers pop out.

The televised coronation of Elizabeth II in 1953 prompted many Brits to buy their first television set. Color became widespread only in 1967, years after Americans had it. Television nonetheless inspired a generation of youngsters to imagine fresh possibilities. Wade argues persuasively that pictures generated in a listener’s or reader’s head are superior and more satisfying than those that appear on a detached screen. “Radio is like television, only the pictures are better,” he says. In fact, the sections dealing with radio and TV are the strongest in the book

Wade profiles a large number of writers, producers, and directors, going into detail that fans and aficionados will find wonderful. The discussion includes musical scores and the way specialty electronic instruments such as the Theramin were used for atmosphere. He explores how young people at the time were enthralled by sci-fi while their parents remained “all too aware of the devastating effects of the atomic bombs that were dropped on Hiroshima.” And yet the comic books and magazines aimed at them “presciently anticipated the real space exploration that came later.”

Using classics such as The Day the Earth Stood Still and Forbidden Planet as exemplars of successful period pieces and topical worries, he also shows how printed publicity posters that accompanied them frequently depicted sexy damsels in distress that had nothing to do with scenes from the actual film. Sensational promotion was the ethos of the time.

The “best worst” films get their share of attention, such as Plan 9 From Outer Space and director Ed Wood’s his infamous repurposing of footage taken of Béla Lugosi, who was dead when this awful classic was actually shot. Little-known tidbits are scattered throughout, such as “the young Steve McQueen, young enough to play a teenager in The Blob.”

A bevy of writers follow along with their brilliantly colored book jackets: Asimov and his Foundation and Robot novels, plus others; Arthur C. Clarke; Ray Bradbury; Robert Heinlein; and John Wyndham. The book then closes with a survey of popular sci-fi comic books and magazines along with publishers including the larger-than-life Hugo Gernsback. So grab your secret decoder ring and your blaster, strap yourself in for liftoff, and enjoy.