The Golden Age of DC Comics 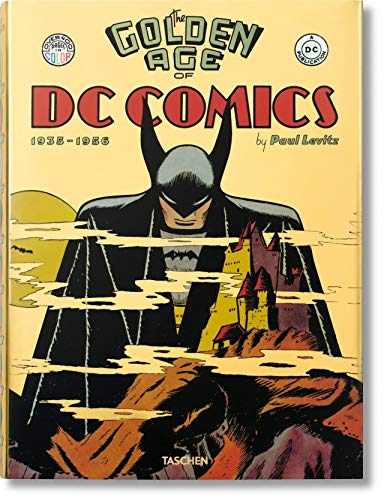 The first appearance of Superman in Action #1 (June 1938) was an atom bomb that blew up the world of publishing, pulps and magazines. Any kid with a copy was automatically the most important kid in the schoolyard, church basement, or on the baseball diamond.

While kids went ballistic for the colorful tale of a man who could effortlessly lift cars over his head and jump over skyscrapers, a small company in New York City was trying to get a grasp on the lightning they had found.

At slightly over 400 pages, and absolutely jam-packed with hundreds of beautiful images of covers, splash pages, original art, and more, The Golden Age of DC Comics by Paul Levitz is not just the story of DC. It is the story of an industry feeling its way in the darkness as it tries to figure out exactly what it is.

Alongside the images of Batman, Dr. Fate, Black Canary, Johnny Quick, Hawkman, Wonder Woman, The Flash, and so many more are photographs, excerpts from radio scripts, kites, movie posters and much, much more. This is as comprehensive a look at DC as we are ever likely to see.

Once our eyes stop spinning from the detailed images of Detective #1 (March 1937), All Star Comics #14 (December 1942, January 1943) or original art depicting Siegel and Shuster’s earliest concepts for Superman, what we take home for Levitz’ narrative is pure American history—a history shaped by opportunists, visionaries, the eager, the hungry, the naïve, and the talented.

The rise of DC is a lesson in business and how it was done in the thirties. While writing of DC’s many glories, Levitz never shrinks from the reality of the thirties or the business practices of the time. In an industry that had not existed in 1933 conflicts and shortcomings are inevitable as many folks scramble for a piece of the comic book pie.

In 1935 Major Malcolm Wheeler-Nicholson sets up a card table in Manhattan’s Hathaway Building. He has just published the first comic book to feature brand new material, New Fun  #1 (February 1935) and he wants to publish more titles.

The major is making money and his distributor, Harry Donenfeld who owned Independent News and also had a hand in publishing racy pulps, was watching. The type of pulps that that Donenfeld was involved with were often sold under the counter due to their risqué content.

Just as Mayor LaGuardia begins to crack down on those dicey pulps, Donenfeld notices how well Nicholson-Wheeler is now doing with his three new comic books. It is now 1937 and real money, accountants and real businessmen enter the picture.

This is truly the world of Damon Runyon as a cast of colorful characters begins to populate the pages of this brand new medium.

As fascinating as the history is, we always come back to the art. Levitz keeps his story of the early days to a tight and insightful minimum. By page 54 we are looking at a two-page spread of Wonder Woman, Green Lantern, and the Flash breaking the finish line simultaneously on the cover of Comics Cavalcade #1 (Winter 1942–1943).

In the wake of Superman’s unexpected success, the costumed heroes begin to show up quickly. A young artist named Bob Kane brings in a character who seems to be a combination of Zorro, The Shadow, and going as far back as penny dreadfuls for inspiration.

Batman debuts on the cover of Detective Comics #27 (May 1939). Other heroes follow in quick succession. The Flash and Hawkman debut in Flash Comics #1. Editorial innovations come fast.

The man who many attribute to the creation of the first comic book, M. C. Gaines contracts with Donenfeld to start his own company. Calling it All-American Comics, they advertise in DC books and DC books do the same in All-American titles. No one is sure what will work. The editors and artists only know that superheroes are selling and that the company needs more.

The Spectre, Hourman, Sandman, The Atom, and more make their debuts in DC Comics. For five years the Golden Age takes shape. As it does DC creates many innovations such as bringing various heroes from each company into a single book. The comic book industry is born.

The company hires a psychologist named William Marston as an advisor. He sees a greater potential for comics and they suggest he create a hero. His wife suggests that it be a female hero and, affirm believer in strong women, he creates Wonder Woman.

Initially it is thought that comic books were for children. But the Second World War give DC an audience of GIs who not only change their audience, they also serve as ambassadors for comic books as they take the four color heroes around the world.

After the War, heroes begins to fade in the public’s eye. DC begins to fill their pages with animal adventures, cowboys, radio shows, and eventually horror. The heroes begin to disappear until it is only the big three (plus Aquaman and Green Arrow) are standing.

This is the story of modern myths and entrepreneurial brilliance. Of flying men, magicians, costumed detectives and Wonder Women. And it all looks so beautiful.

This volume is one of five that were pulled from the 720 page, 2010 release 75 Years of DC Comics: The Art of Modern Mythmaking. The Golden Age of DC Comics. This new book contains additional art as well as a new interview with artist, writer, and teacher Joe Kubert.