Gold Rush in the Jungle: The Race to Discover and Defend the Rarest Animals of Vietnam's "Lost World" 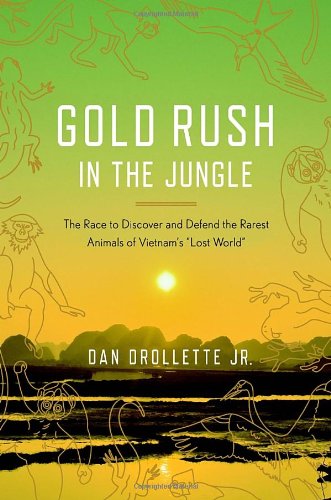 “Gold Rush in the Jungle is a book of opposites, discovery vs. extinction, economic development vs. environmental devastation . . .”

Deep within the jungles of the former North Vietnam there is a deer that barks, a half-goat/half-ox, and a striped rabbit.

Dan Drollette, Jr. is a prolific science writer who traveled from Vietnam to Sweden and beyond to bring the story of the Vietnam's biodiversity hot spots. Gold Rush in the Jungle: The Race to Discover and Defend the Rarest Animals in Vietnam's “Lost World” tells the dual stories of extinction and discovery.

While headlines of extinction and devastation caused by human development is nothing new, Vietnam has become home to newly discovered species, including large mammals. How has this happened? Mr. Drollette explains with a highly readable page-turner, an exemplar of pop science writing.

Divided into two sections, 1998 and 2010, the book chronicles the positive and negative changes that have occurred within the field of conservation.

For decades Vietnam has been devastated by war. In earlier centuries against the Chinese and French colonial forces and more recently against Japanese invaders and American forces. Vietnam's wildlife has survived because “the American War,” as the Vietnamese call it, had limited geographical impact.

The majority of the fighting took place in the South and the bombings were concentrated on specific targets. In another stroke of luck, the primates of Vietnam received help from Tilo Nadler. Mr. Nadler came from East Germany and had a passion for biology. Adept at negotiating Communist Party functionaries, and marrying a Vietnamese woman related to said Party functionary, placed him in a unique position to save the Vietnamese langurs. Langurs are Old World monkeys that possess a persnickety digestive system, making it a challenge for proper feeding and care. Mr. Nadler founded the Endangered Primate Research Center in Cuc Phuong National Park.

The EPRC has since gone on to expand into a rescue center for other species and become a major tourist attraction.

Besides Mr. Nadler, the book follows the adventures of Nate Thayer. Mr. Thayer is notorious for his wild personal style and having interviewed Pol Pot before the former dictator died. After the Pol Pot interview, Mr. Thayer headed a quest to find the elusive kouprey. This elusive bovine, which may or may not be extinct, could hold the key to discovering cures for illnesses in livestock. In the end, the kouprey proved more elusive than Pol Pot.

Mr. Drollette leads the reader on various journeys, from Mr. Nadler's EPRC to southern Sweden to academic discussions with leading professors. In Sweden, he visits the Linnaeus Museum and gives a pocket history of Linnean classification.

The reader also encounters tourists at the EPRC, much to Mr. Nadler's dismay, since the expectations of tourists might contradict the requirements of conservationists. Mr. Nadler wants a controlled environment; tourists want a theme park.

Gold Rush in the Jungle is a book of opposites, discovery vs. extinction, economic development vs. environmental devastation, and political oppression vs. biological preservation.

One encounters a strange phenomenon with one-party states. While one-party rule grease the gears of bureaucracy—especially important when species populations come within a hair of extinction—that same one-party state cripples private communications like the Internet.

Other biodiversity hot spots exist in politically repressive regimes, the two most notable examples being the Demilitarized Zone on the Korean peninsula and the island of Cuba.