The Gold Eaters: A Novel 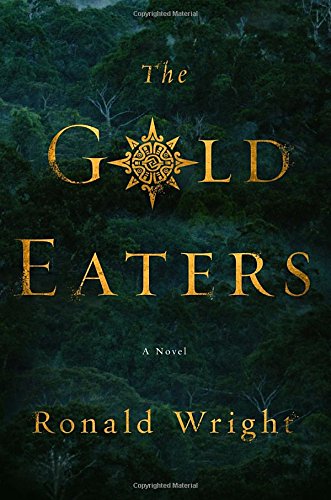 Set in 16th century Peru, The Gold Eaters’ Waman is the headstrong son of a warrior, a young man in search of adventure and danger to prove himself. Waman joins a trading vessel navigating the same waters as Francisco Pizarro and cruises like a shark, searching for Inca gold. The Spanish are so hungry for the shiny metal that the Incas call them “gold eaters.”

Pizarro captures the trading vessel, killing everyone onboard except Waman, who is sent to Spain to learn Spanish and their culture in order to become a useful interpreter. It isn’t long before Waman has adapted and adopted their ways of life. Baptized and renamed Felipe, Waman dresses and talks like a Spaniard, even sporting their signature beard. He is no longer an enslaved interpreter. Waman is now a solider on campaign with Pizarro.

The writing flows smoothly with the plot in this beautiful narrative of historical fiction. An absorbing novel, Ronald Wright revisits content in previous nonfiction (Stolen Continents: Conquest and Resistance in the Americas and Cut Stones and Crossroads: A Journey in Peru) as readers witness the yearnings of Pizarro to make his mark with Peru as Cortes did with Mexico.

Once Pizarro has King Charles I’s patronage in ships and soldiers to infiltrate and bring down the Incan Empire and make Pizarro (and his king) wealthy, Waman’s loyalty and identity are called into question as he must decide if he is a Spanish soldier or if he is an Inca.

Waman gives readers insight into the beauty, danger, and frailty of both worlds. While Peru is lush and fertile, within the rainforests lurk animal and human dangers, warring tribes, and hungry jaguars, as well as the Spaniards with gold-lust in their eyes and smallpox blankets in their hands.

Spain is its own strange manmade beauty in the towns like jewel boxes of densely packed streets and strange people in silks and colored clothing, feathers, and buckles and jewels. They are strange creatures, indeed. But just as dangerous in the streets is the racism and volatility of nations at war.

The story is entirely told from one point of view, and the characters are solidly created and believable—at times even Pizarro is a sympathetic character. Based on real events, Wright carefully crafts the epic struggle that has so long lain dormant on the pages of high school history texts in simple black and white text of dates, place names, and people, of the conquistadores and the Incas.

Wright’s afterword details some of the historical texts and primary documents he uses to base his characters on. For instance, he claims the main events of the story occurred and there was a raid on an Inca ship in which a young Peruvian (or more) was kidnapped and taken to Spain; he was named Felipe. Felipe became an interpreter later on, there are several accounts of him, and they have him rebelling against the Spaniards. It would be nice, however, if Wright had provided citations to the work as well.

Readers looking for more of a romantic thread with their historical fiction will be disappointed, but fans of high adventure will enjoy this grand story. It is refreshing to read a book set in South America: this is not a common setting for American historical fiction, which tends to take place in the epic grand halls of Europe instead of the beautiful rainforests.