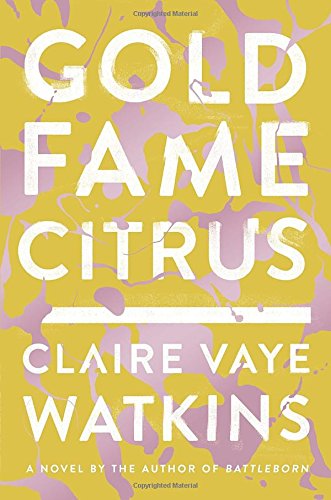 The Sierra is gone. Colorado is dead. Phoenix has burned. The sky is “bloodred with ash.” Cheese comes in jars and looks like DayGlo; pears are grimy, and blackberries are filled with dust. But if you’re looking for a dystopian world that follows an alien invasion, a zombie attack, or a clone takeover, this isn’t it.

The future Claire Vaye Watkins has conjured up in her first novel, Gold Fame Citrus, is a likelier one. With the Sierra snowpack melted, the West Coast has been ravaged by drought. It’s the New Old West. Head east, and you’re bound to get taken up by the Amargosa, an ever-shifting sea of sand dune, the likes of which haven’t been seen since Infinite Jest’s Great Concavity. Head north, and you’ll encounter the militia at the Oregon border.

The novel begins in an abandoned mansion in an internment camp for people described as Mojavs. Luz, the former poster child for the water conservation movement, and her boyfriend, Ray, are living on rationed soda when they adopt—or abduct—an orphan they name Ig.

Looking for a better life, they embark on a trek that so many Americans have made over the centuries, only—in an interesting reversal—they head east, away from what’s left of the Land of Milk and Honey.

It would be an exaggeration to call Ig a character in her own right. She is the starting gun for this journey, a character whose main function is to move forward a meandering, slow-moving plot. She is a figurative echo of the orphan Luz once was, a character meant to be discussed more than she is meant to come to life on the page.

When the couple runs out of gas, Ray looks for help, and Ig and Luz are taken up by a colony bordering the dune sea. In a rickety Blue Bird bus, Luz sets up a life with her new daughter and a prophetic dowser, a charismatic Jim Jones type who harbors secrets that will play out over the remainder of the novel.

As a second book, Gold Fame Citrus feels, in many places, very much like the first novel of a short story writer. In 2013, Claire Vaye Watkins won the prestigious Story Prize and Dylan Thomas Prize for her story collection Battleborn. Like a collection, the novel is uneven. It’s chockfull of formal invention, a multitude of styles that includes a Borgesian bestiary with wandering Joshua Trees, land eels, and jelly scorpions; Greek choruses; questionnaires; to-do lists; and a long commentary on TV shows—all of this characterized by a formal, technical showmanship that fails to propel the story, or illuminate its characters and tropes.

Watkins buries scintillating prose all too often in a poetic verbiage that does little but show off her technical chops. Twenty-three contiguous sentences in one section begin with the phrase “If she went,” rendering what could have been poetic exhausting, demanding of the reader a kind of sentence-diagramming that obscures what little story lies beneath. And if Luz and Ray are more fully realized than Ig, it’s not by much. They’re not just unlikeable in spots; they never break from the wooden molds Watkins casts for them.

Claire Vaye Watkins is undoubtedly a talented, high-concept writer. With this novel, she’s flouted both generic and formal conventions, and for this alone, she should be praised. If she’s found an audience here, however, it’s unlikely to be among sci-fi and fantasy readers looking for the world-building delights of a dystopia or a suspenseful plot.

The world she introduces in Gold Fame Citrus raises more questions than answers: Who are the Mojavs? What are the internment camps? What happened to the government? But the novel seems just as unlikely to resonate with a literary fiction set that favors a familiar world populated by dynamic characters.

Whatever they think of the novel, readers will come away from this book knowing one thing: Watkins is a wickedly smart writer. There is no doubt she has a great novel in her, one that exploits formal invention and sparkling prose to buoy up an unforgettable story and lifelike characters. It behooves us to wait for that book.