God's Shadow: Sultan Selim, His Ottoman Empire, and the Making of the Modern World 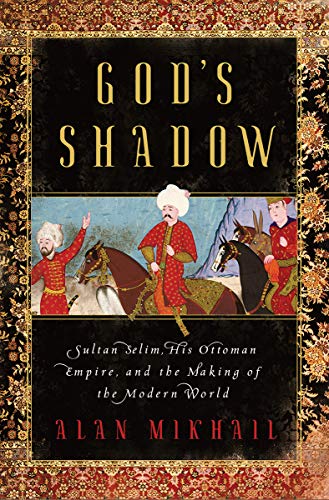 “God’s Shadow deserves high praise for its eminent readability, thrilling narrative, and its focus on the importance of the Ottoman Empire.”

The major point of historian Alan Mikhail’s God’s Shadow is that the Ottoman Empire helped to create the modern world. This is as tenuous a claim as it is profound. Mikahil, one of the world’s leading historians on the Ottoman Empire, is on much firmer ground when he details the life of the fearsome Sultan Selim the Grim, as well as his intense focus on battles between European Christians and the Muslim Turks.

Mikhail’s book, which he claims demonstrates “Islam constituent role in forming some of the most fundamental aspects of the history of Europe, the Americas, and the United States,” is based on the very real fact that when the Spanish and Portuguese began conquering the New World, their shared enemy and the most powerful state in the known world was the Ottoman Empire. Mikhail shows just how much the Ottomans pervaded the consciousness of the Spanish conquistadores by quoting their letters and reports back to Spain, some of which proclaimed that they had found Muslim mosques in the Aztec Empire. In one eye-opening passage, a general alarm goes through the Spanish in Mexico when a ship carrying West African slaves is mistaken for an Ottoman war galley.

God’s Shadow deserves high praise for its eminent readability, thrilling narrative, and its focus on the importance of the Ottoman Empire. After all, Genoese explorer Christopher Columbus set out for the New World in 1492—the same year that the 700-year Spanish Reconquista finally defeated the final Muslim state in Spain, the Emirate of Granada. Many of the conquistadores who defeated the Aztecs were veterans of Christendom’s wars against the Turks in the Mediterranean, and many returned home from Mexico, Hispaniola, and Cuba in order to continue the holy war. As Mikhail points, anti-Turk and anti-Muslim animus ran so high among the Spanish that they gave their New World towns such names as Matamoros, or “Kill Moors.”

Where Mikhail’s argument falters is in his assertion that the Ottoman juggernaut forced Europeans to build better ships, establish trade routes that avoided the Ottoman-controlled Mediterranean, and search for the fabled and supposedly Christian Grand Khan of the Mongols. All of this is true but does not necessarily mean that Europeans would have never set sail for the New World without Ottoman pressure. Frankly, this is not even a question that can be successfully answered.

God’s Shadow is a fascinating, yet scholarly history of the Ottomans, Sultan Selim, and the ancient blood feud between European Christians and the Muslim world. Mikhail is a gripping writer who manages to cover so much history and so many personalities into a moderate-sized book. God’s Shadow also invokes the renewed power of the Republic of Turkey and its Neo-Ottoman ruler, Recep Tayyip Erdogan. A proponent of political Islam, Turkish geopolitical expansion, and Ottomanism, Erdogan’s power and aspirations make Mikhail’s book mandatory reading.