Gods of Jade and Shadow: A Novel 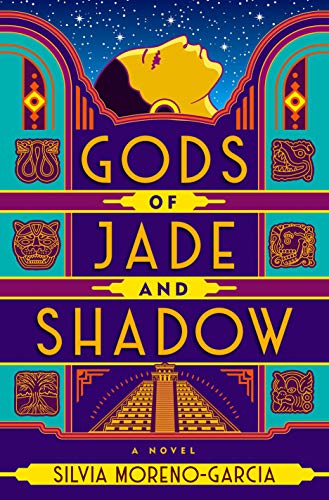 “The final playing-out of the struggle for the future of Xibalba and the mortal world is satisfyingly both personal and mythic, in a way that rings true to the principles of the cosmology from which those gods come.”

Silvia Moreno-Garcia’s Gods of Jade and Shadow takes the reader to 1920s post-revolutionary Mexico, a place still finding its way through the tumult of change. Casiopea Tun, a half-Maya young woman living under the thumb of her stingy grandfather and her cruel cousin Martín, unwittingly frees the death god her grandfather helped to imprison years before.

In many novels that death god, Hun-Kamé, would be the antagonist Casiopea must defeat. But the real threat here comes from his twin brother, Vucub-Kamé. (Their names mean One Death and Seven Death, respectively.) Hun-Kamé is content to let the Maya gods fade from society, sustaining themselves on the natural energy of the land rather than the worship of humans. Vucub-Kamé wants to return them to power—which means restoring the blood sacrifices that, throughout the various cosmologies of Central America, are an essential source of energy.

Much of the pleasure in a novel like this comes from the exploration of that cosmology and its associated culture, but Moreno-Garcia doesn’t neglect the broader mortal world her characters move through. At the same time as Casiopea is encountering sorcerers like the Uay Chivo and the mythological woman Xtabay, she’s also passing through a world of French fashions and indentured Korean workers. For readers unfamiliar with the finer details of Mexican history, these contextual elements are very welcome, building a complex picture that resists easy essentialism.

Some of that comes at a price, though. The omniscient perspective that allows Moreno-Garcia to discourse upon trends and events in Mexican history is frequently distancing when it comes to the characters themselves. For example, as Casiopea’s relationship with Hun-Kamé deepens, the text says outright:

“She thought of him as her friend. It was not the gift that had prompted this, but their daily interactions, his politeness, which were quickly endearing him to her. This was hardly surprising considering how few friends Casiopea had.”

The effect is to pull the reader back from Casiopea’s own thoughts and feelings, instead describing them from an external perspective. The same happens quite frequently with her cousin Martín, who winds up being Vucub-Kamé’s agent in the plot. Moreno-Garcia unpacks the factors that explain Martín’s behavior without excusing them, but almost always in that same external fashion:

This is not a thought Martín himself would ever have, and it means that the reader rarely gets a chance at the kind of close empathy other viewpoint structures more readily provide.

A second difficulty comes from the structure of the story. Once Casiopea frees Hun-Kamé, his problems are not over; he is missing several parts of himself and must collect them before he can hope to confront Vucub-Kamé and win. But that is Hun-Kamé’s quest, not Casiopea’s; she participates, but for much of the novel this involves few decisions or independent actions. She feels more like Hun-Kamé’s assistant, rather than a driver of the plot.

Fortunately, by the end of the novel both of these problems fade away. Part of the reason for this is the nature of the connection between Hun-Kamé and Casiopea: When she freed him, a splinter of his bone lodged in her finger, and it is slowly draining the life from her (in one of the novel’s many riffs on the theme of sacrifice). But this draining effect doesn’t, as one might expect, make Hun-Kamé stronger; instead it makes him more mortal, more human. The flawless beauty and domineering behavior he shows early on in the book gradually fade to something warmer and more imperfect, which feeds his relationship with Casiopea.

And it eventually opens a door to an interesting new angle on the conflict between the two brothers. They expect to fight . . . but do they have to? What if Hun-Kamé could instead relinquish his sovereignty over Xibalba, the underworld, and live with Casiopea as a mortal man? It is when this possibility enters the story that Casiopea truly comes into her own as the novel’s protagonist, and the final playing-out of the struggle for the future of Xibalba and the mortal world is satisfyingly both personal and mythic, in a way that rings true to the principles of the cosmology from which those gods come.