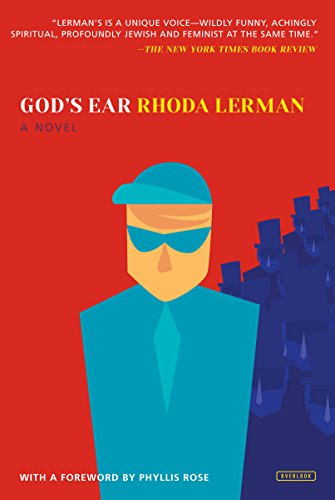 When novelist Rhoda Lerman died in 2015 her New York Times obituary described her novels as not resembling one another. God’s Ear, the fifth of her six novels that were published in her lifetime, represents a return to the social satire of her first two novels, Call Me Ishtar and The Girl That He Marries, after her historical novel Eleanor (about Eleanor Roosevelt) and her blend of historical and fantasy fiction in Book of Night.

Lerman’s sense of humor has been compared to that of Philip Roth (who is three years her senior), but in God’s Ear the humor also employs the traditional Jewish irony and Eastern European Jewish folklore of Isaac Bashevis Singer, especially his short stories. Most of Lerman’s Hasidic folktales in God’s Ear are too long to quote, but the following paragraph gives a taste of her wit:

“Totte, you hear about the old Jew who walked into the SS recruiting office before the war? He comes in half-blind, crippled, palsied. He goes up to the Nazi recruiter and says, ‘I just came in to tell you, on me you shouldn’t count.’”

Readers will not find long Rothian sentences and paragraphs in God’s Ear whose short direct sentences are more like those of Roth’s Israeli friend and fellow novelist Aharon Appelfeld. The novel does have a Rothian turbulent father-son relationship, but the resulting emotional block or tragicomic flaw is overcome by a psychological breakthrough and personal growth, unlike Roth’s characters who are often their own nemeses. Where Roth is a pessimistic realist, Lerman is an optimist who believes in transformative change and is willing to employ magical realist devises to assist it.

God’s Ear’s Orthodox characters anticipate the fiction of Jewish-American authors a generation younger than Lerman such as Allegra Goodman and Nathan Englander. The novel was first published by Henry Holt and Company in 1989 (the same year as Goodman’s debut short story collection Total Immersion and nine years before her breakthrough first novel Kaaterskill Falls) and represents a link between the post-war and turn of the 21st century generations of Jewish-American fiction writers. God’s Ear’s timeless combination of serious humor, Jewishness, spirituality, and feminism convinced Syracuse University Press to reprint it in 1997 and The Overlook Press to do so now two decades later.

Yussel Fertner grew up in Kansas City, Kansas, the scion of a Hasidic dynasty. Like his father and forefathers he had a traditional Jewish religious education leading to rabbinic ordination, but unlike them he decides not to pursue a rabbinic vocation (fulfilling his mother’s wish and disappointing his father) and instead moves to Rockaway, Queens, NY, where he becomes a successful insurance salesman, marries, has children, and integrates into the local Hasidic community.

The Fertner rebbes are known to have the gift of prophecy, and Yussel’s success results from his clients’ belief that he has it, too. When he tells them to buy more life insurance they assume he foresees an event that will justify it.

The Fertner men indeed have a mental television or computer screen on which future events are foreseen. When Yussel’s father dies early in the novel he thereafter occupies Yussel’s screen, and the father-son dynamic becomes the novel’s central relationship.

Because he mistreated his first wife (Yussel’s mother), Yussel’s father—who appears wearing an array of silk pajamas and bathrobes and bearing a rod on his shoulders with doors at either end like a water carrier’s buckets—is stuck in purgatory, cannot reach paradise, and will not leave his son’s mental screen unless and until Yussel accepts and pursues his rabbinic vocation, gives up his material success, circumcises his heart, and cleaves to God’s will.

To accomplish that he will have to change his relationship to women and see them as fully human (Lerman’s feminist moral to the story) and thereby become fully human himself. One of the novel’s inconsistencies is that to atone for his father’s mistreatment of his mother Yussel must disobey his mother’s wish by fulfilling his father’s vocational desire.

Like their rivals Chabad Lubovitch, the Fertners’ fictional Hasidic sect reaches out to unaffiliated Jews. Yussel’s father’s Kansas City congregants are a collection of ne’er do wells and spiritual seekers referred to as the shmeggegies, the plural form of a Yiddish word meaning jerk, an idiot who doesn’t know he or she is an idiot and is unaware of the harm he or she inadvertently causes. Instead of assuming the helm of that insolvent congregation in the same location the paternal ghost instructs Yussel to form a new community in Moffat, Colorado.

Yussel quits his insurance job, sells his Mercedes Benz, and drives his father’s old Honda nicknamed The Shanda (Yiddish for embarrassment), leaving his wife Shoshanna and his children in Rockaway while he sets up the new community in Colorado. There he meets and falls in love with Lillywhite Stevie, a red haired neighbor, successful businesswoman, and daughter of a Jewish father and Lutheran mother, who wants to recite Kaddish at her father’s grave in Queens, NY, even though in Orthodox Judaism the prayer can only be recited by Jewish men within a quorum of Jewish men. He is also attracted to his father’s widow whose nickname is The Flower Child.

Lillywhite asks The Flower Child about her husband’s son.

“His son? His son is like a beautiful woman who wears a veil. A veil of knots and angry colors. A thick veil. He hides from himself, from his own humanity. His father of blessed memory wasn’t frightened to be human.”

Yussel’s challenge is to treat all the women in his life fairly, openly, and honestly, but to do so he must be honest with himself and thus fully human. This review will not reveal how that transformation occurs, but finding out is an entertaining read. For good reason university and small press publishers want to keep this book in print and rescue its author from obscurity.