God's Doodle: The Life and Times of the Penis 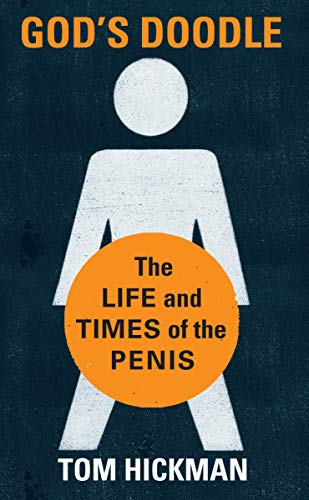 “If you have a penis, know a penis, or would like to get to know one—pick up this book and read it!”

God’s Doodle is a social and popular history of the penis. This book is more than humorous, it is intelligent, fascinating, and unique (at least two out of three things Tom Hickman says about the penis).

The author, Tom Hickman, is a journalist who has worked for the BBC, and his reporting expertise shines through as he tackles man’s tackle. Hickman proffers puns aplenty to make you groan or laugh, but he balances this with serious conversation about the penis.

His reporting skills shine through as he goes beyond the major sex studies of our century and examines the history books and primary documents for information. Hickman does not rely only on secondhand information nor does he disseminate old information in a new package; instead, this book, though short, is filled with data, anecdotes, myths, and facts.

There are four parts to the book that gather the chapters together, and each of these parts are opened with a pithy quote or bon mot, such as Juvenal’s: “Mankind is ruled by the Fates, they even govern those private parts that our clothes conceal. If your stars go against you the fantastic size of your cock will get you precisely nowhere . . .”

At the end of each section is a list of notes; however, it is disappointing that further reading, such as the surveys and studies Hickman mentions, are not gathered together in one place.

Part one of this book deals with the basics—aesthetics, details, measurements, and evolution. Kinsey’s studies as well as Master’s and Johnson’s are mentioned and discussed. Hickman also points out that quite often when one wants to demean or ridicule a man, more often than not his penis size is mocked. Even throughout history, when a conquering army wanted to diminish the size of an empire, they often diminished the size of the emperor.

Part two examines the primacy of the penis, or phallocentrism—it’s worship in religion from the ancients to modern-day, looking at Judaism and Christianity, and its rise in popularity and the central part it played in men’s fashions via the codpiece, which started out as something serious and functional and devolved, or evolved, depending on one’s viewpoint, into an ornate and outrageous expression and suggestion of what lurked beneath the tights.

Apparently there was a short-lived attempt by a fashion design professor at Washington State University to bring back the codpiece. Clearly the movement hasn’t moved forward . . . yet.

Part three, Uneasy Lies the Head the Wears the Corona takes a serious look at the hazards of penis ownership—everything from the dangers of zipping one’s pants to being castrated by your enemy, or angry wife. Cultures with superstitions about the penis are briefly examined, including those African and Asian tribes that believe sorcery can steal a man’s potency, and the one-time Western belief of spermatorrhea. Spermatorrhea was sperm loss that could lead to madness, according to Victorians.

Without seeing the whole survey, one is left to wonder if perhaps the correlation is less about the semen and more about the idea that women who have sex or are in stable relationships have better self-esteem and have less depression.

Hickman liberally sprinkles lots of intruiguing literary references throughout the book. God’s Doodle is a fantastic read. It is lighthearted and serious at the same time. If you have a penis, know a penis, or would like to get to know one—pick up this book and read it! Even for serious scholars of sex research, this is a quick and fun read.