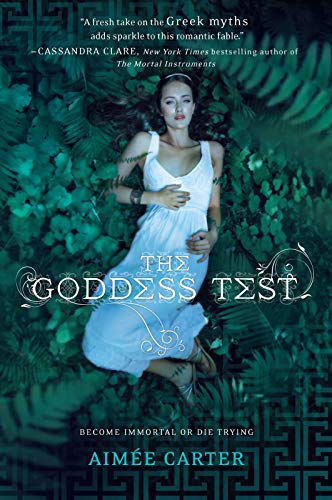 “Aimee Carter does a great job of creating a very interesting and entertaining new fantasy series.”

Eighteen-year-old Kate Winters has been taking care of her dying mother for four years. When they move back to Eden, Michigan, her mother’s hometown, Kate’s mother has her take a detour to show her the tall iron gates of Eden Manor, but gives no further explanation.

In an attempt to graduate, Kate attends the local high school and does her best to keep a low profile; however, the nerdy-but-loveable James insinuates himself into her life, making it nearly impossible to keep to herself.

Despite herself, Kate meets top football star, Dylan, and his very clingy, cheerleader girlfriend, Ava. Later, James proves to be a buffer, but not a protector, when Ava insists Kate join her and some friends for a party at the river. Despite her inability to swim, Kate realizes Ava won’t take no for an answer and reluctantly agrees.

As expected, the party is a ruse. Knowing Kate can’t swim, Ava takes her across the river, but before abandoning her on the other side, Ava warns Kate to stay away from Dylan. As Ava dives in to swim back, she crushes her skull on the rocks. Despite her fear, Kate jumps into the river, but it is too late.

Realizing they are just outside the gates of Eden Manor, Kate screams for help. A very handsome young man named Henry appears and grants Kate her wish to bring Ava back to life—but in return, Kate must read the myth of Persephone, promise to return to the manor in two weeks, and remain with Henry for six months of every future year.

With Ava back alive, Kate begins thinking that the whole event was a hoax and that Henry is just toying with her. As a result, Kate doesn’t hold up her end of the bargain. Then, when the dark and mysterious Henry proves just how serious he is, Kate’s life changes forever.

The first in a new series, The Goddess Test puts a fresh twist on the YA paranormal genre by infusing it with back-to-the-basics Greek mythology. Kate is asked to read the story of Persephone so she will know what she is agreeing to. As the story goes, Persephone is kidnapped by Hades, Ruler of the Underworld, and forced to rule with him six months out of the year. During the months that Persephone is ruling, the rest of the world experiences winter. She eventually falls in love with a mortal and when he dies, she chooses to give up her immortality.

With Persephone gone, Henry, aka Hades, has only 20 more years to replace her. If he fails, he will fade away, and a new ruler will take his place. But Kate isn’t the first girl who has attempted to fill the void. To determine her eligibility, Kate will need to pass seven tests that will be given announced—or with no advance notice. If she succeeds, immortality will be bestowed upon her; if she fails, she will be free to go on with her life with no recollection of recent events.

Though Ms. Carter does a good job giving the genre a breath of fresh air, she stays close to the tried and true profiles of the typical character. Kate is a very relatable and likeable, and at 18 is being asked to make a very life-altering decision. It seems at times that she takes things a little too lightly and does not give much thought to her actions. Henry is the usual male lead: dark, brooding, and handsome. Although he is affable and interesting, he often runs hot and cold. When he finally does begin to warm up to Kate, it’s so quick it almost seems contrived.

Although there are a handful of weak areas, the setback isn’t severe. Ms. Carter deftly recovers from any storyline snags, moving the story forward and managing to smooth over most of these tiny little wrinkles.

Goddess Test sets up the story and covers the first six months of Kate’s bargain with Henry/Hades. Despite a few quirks, Aimee Carter does a great job of creating a very interesting and entertaining new fantasy series.

The question now is how Kate will adjust being in the real world for the next six months, knowing what lies in wait for her. Hopefully, the second book, Goddess Interrupted, will provide the answer and offer a more solid sense of the series’ direction.