The Goddess Pose: The Audacious Life of Indra Devi, the Woman Who Helped Bring Yoga to the West 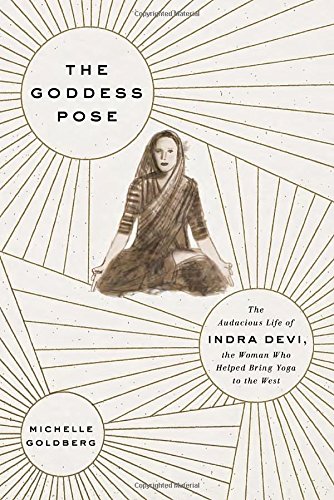 The cover of The Goddess Pose bears a graphic design similar to Indra’s net, which in yogic tradition is said to have been cast by the benevolent being Indra over all that is, in order to illustrate the interconnection and interdependence of all that is.

Readers won’t have to get too far into The Goddess Pose to realize that this is the perfect metaphor for the audacious (confident, daring, bold, even shocking) life of Indra Devi.

Biographies aren’t always page-turners, but author Michelle Goldberg presents one here, with the fascinating story of the woman who helped bring yoga to the West. The Goddess Pose includes complete research notes and a full index. Chapters flow from one to another effortlessly.

Indra Devi was born Eugenia Peterson in Latvia; during her life she used various individual and surnames. This daughter of European nobility introduced the ancient discipline of yoga into Russia, America, China, Mexico, Argentina, India, Panama, and the Philippines. The cast of characters in The Goddess Pose is extensive and includes Gandhi, Nehru, Vivekananda, Gloria Swanson, Marilyn Monroe, Dale Evans, Russian cosmonauts, and the famous violinist Yehudi Menuhin.

“As a child,” Devi once wrote, “I intuited that happiness only came to those that dared to follow their own path.” And so the story unfolds, from Eugenia’s school days when she longed to enter a stage career like her mother. She never dwelled on trauma; instead, she made letting go of the past the centerpiece of her personal spirituality and self-development.

In the 1920s, many Russians had streamed into Berlin. It was impossible to save for the future; people had to live the in the present. Eventually, Eugenia would find the teachings of Theosophy, a philosophy seeking direct understanding of the mysteries of the universe, and the bonds that unite the universe, humanity and divinity, and which created a bridge between ancient and contemporary Eastern and Western spirituality.

Eugenia made her way to India, taking her first step on the path of yoga. She went by the Anglicized version of her name: Jane. She felt at ease with the rich, powerful, fascinating people she was meeting through her teacher, Krishnamurti. She adored the art, spirituality, internationalism, and social progress that she was experiencing during her film career there.

Like her acquaintance Nehru, Devi understood that the body is sometimes forced to adapt itself to new conditions (or adventures), and that yoga is a method for finding things out for oneself experientially. She met the yogi Sri Krishnamacharya, who at the order of the maharaja, taught her (a Western woman!) a more gentle approach to yoga movements and breathwork than he taught to his male Indian students. Krishnamacharya wished she’d go away; Devi persisted. Later, after also studying with Swami Sivananda Saraswati, the teachers would send Devi to teach yoga in other countries around the world.

Devi arrived in the U.S. in 1947 with “only one thing left to do . . . begin anew.” People like the Aldous Huxleys were enamored of her, with her sari, eastern European manner of speech, and Indian name.  She taught yoga as a scientific practice rather than a spiritual one. In 1962 she opened a school for training yoga teachers. Wherever she went, she knew the universe would ensure her well-being – even in Vietnam in 1965. Back in India, she met Maharishi Mahesh Yogi and eventually became a devotee of Sai Baba (which she renounced in 1983).

In her 80s, Devi became known as Mataji (dear mother) while she was in Argentina, where she settled in 1985. According to The Goddess Pose, Devi’s only goal during much of her life had been to make yoga known to the West. Author Goldberg cites a 2012 Yoga Journal survey indicating that 20.4 million Americans (nearly nine percent of U.S. adults) practiced yoga. Devi wrote four books about yoga. She passed away in 2002 at age 102.

The Goddess Pose is recommended for individuals who want to read the masterfully told, phenomenal story of a little-known but highly influential life.