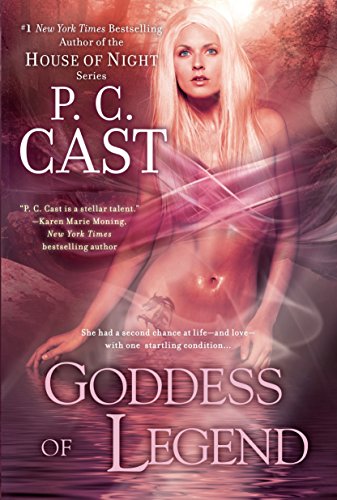 Though readers might be more familiar with her New York Times bestselling House of Night novels, P. C. Cast has long been a romance reader favorite due in part to her Goddess Summoning series—one that ranks among the best in the romance genre. Her latest novel Goddess of Legend, however, though entertaining, is not one of the stronger examples, nor truly representative of the storytelling of which this author is capable.

The titular goddess is Vivane, the Lady of the Lake. Heartbroken that her lover Merlin has shut himself off from the world, she decides to alter the future and stop tragedy before it strikes, and ensure that all at Camelot—including herself—are given their happy ending.

Viviane devises a plan to distract Lancelot, seduce him away from Guinevere before their love truly blossoms. However, no ordinary woman will do. Viviane combs all of time to find the right woman with the right combination of qualities to complete the task. In present day, she finds Isabel, a photographer who is about to drown. Instead of dying, Isabel is whisked back to Camelot and the Lady's mission. Things begin to go astray, however, when she arrives at the castle—sure, Lancelot is cute, but it is to Arthur that Isabel finds herself drawn.

Cast really excels when dealing with Greek myths and fairy tales, where the edges are not as clearly defined, and there is wiggle room—scope to imagine and re-imagine events, relationships, and motivations. When tackling a myth as well known and oft-described as the Arthur/Lancelot/Guinevere triangle, however, that scope is so narrow as to be nonexistent. While many writers have explored the Arthurian tales and characters, the core love story and its tragic ending has always remained the same. In making Isabel such a central character, and her actions have such far-reaching consequences, Cast has destabilized the myth, removed its emotional core, and created a story whose sum is very much less than its parts.

A big caveat is that the story remains enjoyable, light-hearted and humorous. Taking the weight of history out of the equation, it would probably succeed as a fluffy time-travel story that might rely too heavily on the language barrier for laughs and might be a little shallow when dealing with problem solving and equality issues, but is nonetheless a perfectly lovely way to spend an afternoon.

Fundamentally, Goddess of Legend isn't a failed novel—if P. C. Cast couldn't do it, I very much doubt anyone could—but perhaps proof that there are some stories that should remain untouched. No matter how many countless readers through the ages have wanted Arthur, Guinevere, and Lancelot to find their happiness, and for the golden age of Camelot to thrive, it is in the tragedy that the story lies—and the truth and insight that makes it resonate.