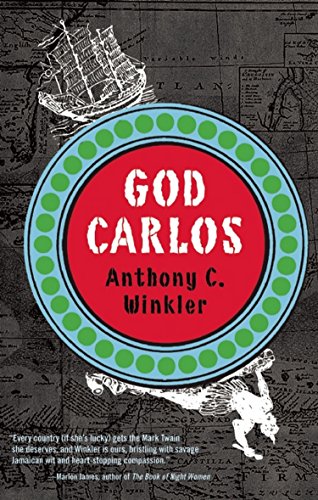 How did a small number of people from the western tip of the Eurasia, a peninsula called Europe, come to dominate the Americas?

For centuries, Europeans (and their American-born descendants) convinced themselves their conquests stemmed from being more industrious and Godly than the peoples they conquered. But Europeans must have been aggressive and militaristic to have embarked on these conquests.

With conquest comes guilt and nostalgia for what was lost: Indians became noble savages in Euro-American stories, doomed guardians of a simpler and more virtuous way of life.

But wait. Modern historians tell us that the Indians were a diverse lot and pre-Columbian America was anything but Eden. There were violent and exploitative Native American empires; there was cannibalism, human sacrifice, and environmental degradation.

What is a writer to do with this Columbian contradiction?

Set in 1500, a generation after Columbus’s voyages and a time when the Spanish foothold in America was still slippery, the book features two protagonists. The first is a bawdy, insecure Spanish sailor named Carlos. Via Carlos, Mr. Winkler takes us from the docks of Cadiz, Spain, to New Seville, the first permanent Spanish settlement in Jamaica.

Through his second protagonist, Orocobix, he also shows us an Arawak Indian community in crisis. Besieged by plague and warlike Carib Indian rivals, Orocobix is in search of a God who can help him mourn his lost Uncle and save his clan.

Though small, dirty, and prone to violence, Carlos becomes a God to Orocobix, a man in need of a God. Carlos’s accompaniments—guns, ships, a strange language—are proof of divinity. To the Spaniard, Orocobix’s willingness to provide food, entertainment, and women to rape are proof of the savage’s usefulness. Without lecturing, Mr. Winkler uses Carlos and Orocobix to explain how the Spaniards came to conquer a piece of Jamaica and, by inference, how Europeans came to conquer the Americas.

Mr. Winkler, author of a half-dozen well-reviewed books, has a lovely way of telling a good story and educating concurrently. The following is a good example, as Mr. Winkler comments on an Arawak priest buying into the argument that the Spanish must be Gods: “This was the orthodoxy that the shaman preached, speaking in the superior tone of one who knew. He had to know, for if he did not know, what good was he as shaman? So when he spoke about the gods, his voice was like a papal encyclical, and no one could doubt him.”

Woven into the narrative are asides about the founding of Jamaica, 16th century Spain, sailing and science during the Age of Discovery, and the ways of the Caribbean Indians. God Carlos teaches history in a subtle but meaningful way.

Too literary to be lumped in with typical historical fiction, and too historical to be lumped in with typical literary fiction, God Carlos defies categorization. It is a contradiction. And with God Carlos, Anthony Winkler explains the Columbian contradiction, how several thousand Spaniards and Portuguese came to dominate the millions of Indians from Texas to Argentina, a population and landmass larger than Europe itself.