God of Broken Things (The Age of Tyranny) 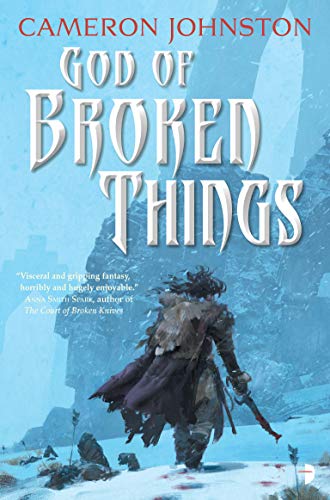 “The end result is that Johnston delivers a kick-in-the nuts, edgy, and dark book that excites on every level.”

Anti-heroes, protagonists who possess very few, if any, heroic qualities and are liked despite of their often corrupt natures, have become a favorite riff for writers in the past couple of decades.

The real problem in having an anti-hero as a main character is that few authors can pull it off with any sense of style or ability to have the reader actually give a damn about them. The most notable of anti-heroes include George RR Martin’s Tyrion Lannister from A Song of Ice and Fire series and Mark Lawrence’s Jorg Ancrath from The Broken Empire trilogy. That being said, Cameron Johnston’s God of Broken Things gives us a memorable, engaging-in-spite-of-himself anti-hero, the wizard Edrin Walker.

Foul mouthed, ill tempered, and damaged in both body and soul from betrayals too numerous to mention, Edrin is the last guy to turn to when the world is teetering on the brink of annihilation. However, as the only mage with the ugly power to control the minds of others and detect body-snatching parasites called the Scarrabus, the Arcanum (wizard’s guild) of the city of Setharis has very little choice in the matter but to turn to Walker for help.

Norse-type raiders called Skallgrim and their demon-controlling magicians are planning to invade Setharis, bringing a large host to lay siege to the city. Controlling the Skallgrim are the parasitical Scarrabus, who drive the invaders with a single-minded precision.

The Clanholds (think Scotland on steroids) stand in the way and plead to the Arcanum for help . . . and for Edrin Walker. Walker doesn’t want to go, but his sense of duty compels him, so he leads a coterie of guardians led by the Mage/Knight Eva into the mountains to face the much larger force of Skallgrim in an effort to slow their advance, buying time for Setharis.

Once in the Clanholds, Edrin does the one thing he’s been avoiding for years, confronting a past that scarred him both physically and mentally while simultaneously coordinating the defense of the mountainous region. Walker soon realizes that he might have to make the ultimate sacrifice to fend off the army of demons and Skallgrim, a choice his selfish heart really doesn’t want to make.

God of Broken Things is the sequel to The Traitor God and can stand by itself because there is enough plot exposition littered throughout to fill in Edrin’s backstory.

Johnston takes the tired trope of The Invasion of the Body Snatchers and breathes new life and a frenetic energy into it, setting it into the backdrop of an epic fantasy. Added to this is a noir feel and a narrator (Walker) who is both noble and venal, a mix that shouldn’t work but does. The end result is that Johnston delivers a kick-in-the nuts, edgy, and dark book that excites on every level.