Go Ahead in the Rain: Notes to A Tribe Called Quest (American Music) 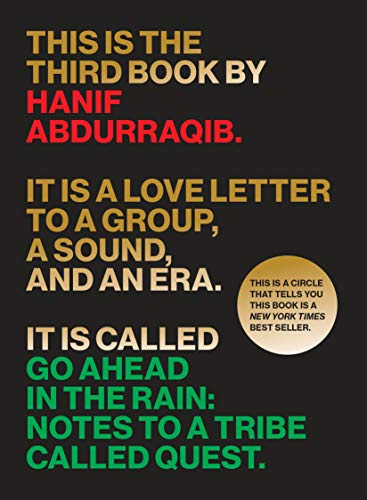 “Go Ahead in the Rain is a musical memoir in which the narrator comes of age and becomes a man.”

Who is Hanif Abdurraqib? And what does the subtitle of his book really mean?

The answer to the first question isn’t as easy as it may seem. On his website, Abdurraqib writes, “Hi, I’m Hanif. I write poems. I write things about music. I am probably eating French fries.”

So he writes “things about music.” That’s an interesting choice of words. He doesn’t say “essays” or “pieces,” which might sound pretentious. Above all, Abdurraqib doesn’t want to sound pretentious, which might be why he explains that he eats French fries—and apparently enjoys them

In fact, he’s an African American intellectual who writes about music, and also a guy from the hood who can talk hood lingo. In a black-and-white photo Abdurraqib wears a cap backward. He has a beard and a mustache. The text on his jacket reads, “Ohio Against the World.” (Mr. Abdurraqib is from Columbus, Ohio, and he’s not a lone dissident).

As for an answer to the second question about the subtitle for his book, that’s even more challenging to answer than the first. This book is ostensibly about a rap group from Queens with the name “A Tribe Called Quest” that made music history from 1985 to 1991 and who had clever rhymes, as in the lyrics, “Mr. Energetic, who me sound pathetic?/ When’s the last time you heard a funky diabetic?”

A Tribe Called Quest is the peg that Abdurraqib uses to hang his ideas.

Indeed, Go Ahead in the Rain is all over the place and with great ease. The author writes about slavery, drums, drumming, jazz, Afrocentrism, the New York Knicks, rap, Rodney King, success and failure, Tupac Shakur, Otis Redding, the Grammy Awards, and much more.

Some of the subjects he writes about are predictable. Others less so, even surprising as when he talks about African American mothers, Leonard Cohen’s life and lyrics, and about magazines such as Jet and Ebony.

What holds all the desperate elements together is Abdurraqib himself. Go Ahead in the Rain is a musical memoir in which the narrator comes of age and becomes a man.

Abdurraqib describes an incident when he hit his older, bigger brother. “During a game of cards, I crashed a closed fist into my brother’s cheek and then ran and hid in a closet until he calmed down,” he writes. “When you are the little brother, even if you are only younger by a handful of months, or only little by way of stature, you do what you must not to be entirely overshadowed.”

He adds, “I do not yet regret the times I was less than good to him.”

Abdurraqib is insightful about sibling rivals, cool, un-cool, and the gap between the two. “There is a lot of currency in the space between immensely cool and not at all cool,” he writes.

At one point in his memoir, the author suggests that he was nerdy. That’s hard to believe. In Go Ahead in the Rain, he seems immensely cool.

His book reads in part like a nifty advertisement for himself, though he may not need to promote himself as much in the near future as he does now.

In 2020 Random House will publish his book, They Don't Dance No' Mo'. Abdurraqib is going places. In fact, he already has, as Go Ahead in the Rain manifests.

A portion of this book was previously published in a literary magazine. In that portion, which represents some of the very best writing in the book, Abdurraqib observes, “We are maybe each other, through two different mirrors.” At times, he can be deep.

This book is for those who already love rap and also for those who want to learn more about its genesis and evolution. It makes a good companion to Soren Baker’s The History of Gangster Rap which describes the evolution of an “American art form.”

Go Ahead in the Rain traces much of the evolution from the inside looking out. It might persuade readers to listen to A Tribe Called Quest. Abdurraqib would like that very much. So would the members of the group that burned brightly, briefly