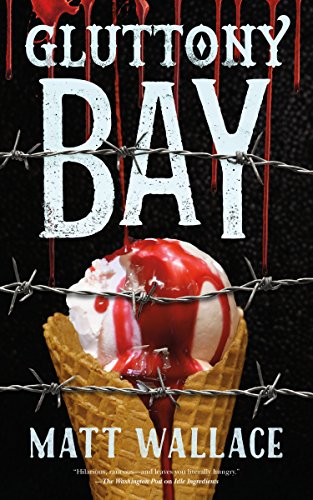 Gluttony Bay is the sixth book in the Sin du Jour Affair by Matt Wallace, preparing fans for the Martini Shot of the series. The opening chapter gives a rundown of the characters and insight into Sin du Jour: a unique New York City premiere food catering company. Wallace has created a motley crew of misfits—chefs, line cooks, busboys, and servers—who cater food to the paranormal and consider each other (mostly) family.

When two members of the kitchen are kidnapped and hauled off to be guest chefs at Gluttony Bay, a high-security supernatural prison, located next door to Guantanamo Bay detention camp, it's up to their kitchen buddies to track them down and form a rescue operation. Meanwhile, the two chefs face a life or death meat-prep dilemma.

The character Lena is well developed with a strong arc that shows her strengths and weaknesses while she battles with her violent past, her perplexity regarding forgiveness, and wanting to love and feel loved. In the chapter, Home Invasion, the reader is reminded of Lena’s hard-core background while she fights an unwanted guest.

“She knows how to counter a rear naked chokehold, was taught countless times while grappling on a practice mat back in boot. There’s no leverage she can gain, however, and no force she can exert to pry herself or her attacker’s arms free.”

The aforementioned character is juxtaposed beautifully by Wallace in the chapter Sins of the Morning, where he describes Lena's battered and bruised body, followed by honest dialogue where her tenderness and fragility surfaces.

“When I came back from Kabul, I didn’t want to keep in touch with anyone from my division, not even on fucking Facebook. It’s not that they were all assholes; it’s just…I didn’t need to rehash everything that happened over there and I didn’t want to be made to think about it all the time. But then, sometimes, you need to be with somebody who understands, and nobody back here understands, least of all Darren. You can’t explain to someone who wasn’t there what it was like, or why you are the way you are because of it. You can try, and they’ll nod and their eyes will be all full of sympathy and they’ll repeat some shit they heard or read somewhere, but they can never get it. I like that you get it, and that you don’t remind me of being back there.”

Wallace's witty descriptive prose and dialogue help navigate through a couple of bile-rising, vomitous scenes, which momentarily linger in the real-life racism of the nonfictional world. The chapter Tonight’s Special is both shocking and poignant—hard to digest in more ways than one.

“You really think I’ll kill this boy for you?”

“No, Byron, I think Miss Tarr will, and you’ll help her prepare him for tonight’s guests at Gluttony Bay. Mexican will be a rare treat for them.”

Vegans beware, there's a lot of detailed carnivorous dialogue in this culinary, darkly humorous novella, not a book to chow down on before dinner.

Gluttony Bay is not a stand-alone novel, but part of the Sin du Jour series.

Best to start with book 1.