Gloriana: Or, The Unfulfill'd Queen 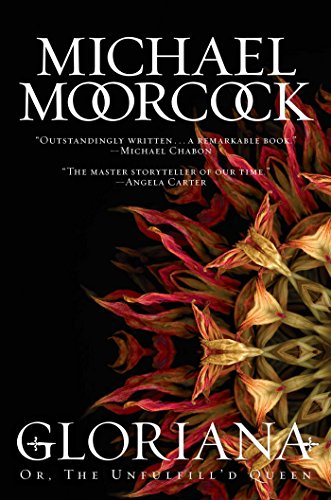 “Gloriana is a sumptuous piece of literature: an important, unbridled, and passionate piece of art.”

In Gloriana: Or, The Unfulfill’d Queen, the reader is led onto a blank canvas framed with gold gilt. As the first brushstroke of color emerges, one is gently drawn into a rich palette of epic stand-alone storytelling by author Michael Moorcock.

A character enters and his story unfolds. He wanders from room to room and picks up conversation with another. Here the narrative is discreetly handed over from one character’s point of view to the next, leaving the reader with a sense of drifting through a Monet painting.

Upon the canvas a town emerges, a tiled roof, a palace drenched with secrets, and a queen who is brilliant, glorious, and unfulfilled. The gaudy rooms of her palace fade, and a new image arises. Through vivid prose, the mood is set for a murderous rogue: “Captain Quire sat up on his grease-veined bed-sheet . . .” Quire sees himself as an artist, “that looks upon reality and transforms it into drama.” His thoughts on war that he shares with his sidekick, Tinkler, carefully reveal where his strengths and weaknesses lie.

As Captain Quire puts it: “It is the business of war to simplify, Tink. Most men prefer it, when it comes, because their lives are far too complicated. Peace throws men into a kind of confusion few of them have the strength to bear for long—responsibilities blossom. Most of the world is made up of weaklings, Tink—and in war they flourish. Oh, how the weak love to fight!”

The language, costumes, customs, and locations of Gloriana appear Elizabethan, but this tale belongs to the alternate kingdom of Albion. A place where secret battles are fought by a solitary beast, skilled in the art of conspiring illegal deeds, each wrongful act unknown to Gloriana, who rules under the innocent guise of peaceful resolution.

“There can be no war,” she said. “It has always been our agreed policy, with Sir Orlando, that war wastes lives and money, that it introduces a false sense of unity while it is being fought and creates unexpected dissension when it is over, for once men get the habit of making war they find it hard to lose, and must look for other wars, other enemies.”

Quire and Gloriana are two juxtaposed characters who above all else share a deep devotion for the Kingdom of Albion. At times, the hidden world beneath the palace mirrors the dark recesses of both Quire and Gloriana’s psyches. Candlelight throws shadows across empty rooms. Ancient cells with broken doors harbor creatures, some blind, some deformed: a cruel and wretched world living beneath the grandiose indulgence of royalty.

Michael Moorcock’s exquisite imagery tugs at every sense. His use of language is delicious and mouthwatering, reeling in the reader with perfect prose and imperfect characters. This is a story where the barrier between fantasy and realism are blurred, perhaps because the story is timeless, as are the inner demons each character confronts.

Gloriana is timeless: evocative of fairytales and the best of mythology. Reminiscent of an evening at the theater, complete with a handkerchief to catch tears. Gloriana is a story of love and passion, cruelty and deceit, and reveals the unraveling of humanity and the fierce, untamed love that pulls it back together. Gloriana is a sumptuous piece of literature: an important, unbridled, and passionate piece of art.