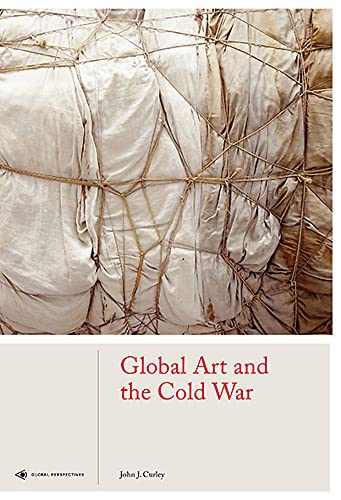 “Throughout these tumultuous decades, artists have sought to express themselves in harrowing circumstances. John J. Curley provides a lucid summary of the era and unique insights into famous and unknown artists.”

What is the artist’s place in society? What demands are made on the artist from political and economic forces? These questions surface numerous times throughout Global Art and the Cold War by John J. Curley. Curley, an associate professor of art history at Wake Forest University, specializes in European and American modernism. A previous publication, Conspiracy of Images, focused on the works of Andy Warhol and Gerhard Richter.

The Cold War was a prolonged conflict (circa 1945 to 1990) that pitted capitalist democracies against Soviet-style communist dictatorships. Like the first and second world wars, the Cold War became a globe-spanning contest between rival ideologies. Popular memory frames the Cold War as binary and manichean, the Forces of Light versus the Forces of Darkness. (Cold War rhetoric lives on, zombie-like, in the conservative attacks and disinformation campaigns directed at health care reform in the United States.)

During this time period the United States and the Soviet Union battled each other using the weapons of diplomacy, trade, and stockpiling thermonuclear warheads. The bombing of Hiroshima and Nagasaki had completely changed the metrics of armed conflict. By the fifties both sides had enough atomic weaponry to not only annihilate each other but to effectively cause human extinction. Into this new world order came reactions from global artistic communities.

How did artists make sense of this ideological landscape? The first chapter of Global Art and the Cold War is emblematic of the rest of the book in its questioning of the sociopolitical foundations of Soviet and US systems.

After a short introduction laying out the global stakes of the major players, Curley subversively undermines each respective mythos. Taking two key movements from the era, he exposes “The Socialist Roots of American Abstraction” and the “The Modernist Origins of Socialist Realism.”

Using Jackson Pollock as an example, he relates how his brand of Abstract Expressionism came to symbolize rugged individualism and political freedom. As Curley states, “Jackson Pollock, for instance, worked on an anti-capitalist float for a May Day parade in 1936. . . .[M]any American artists in the 1930s regarded socialism as a viable and, indeed, necessary alternative to the capitalist and fascist systems wreaking so much havoc in the West.”

Yet Curley’s exegesis of popular art movements isn’t simply that of contrarian stabs at populist mythologies erected during the Red Scare. To complicate the discussion, he looks at the abstract expressionist work of Cuban artist Raúl Martínez. If abstract expressionism symbolizes personal freedom, how does that square with an artist working under the repressive regime of Cuban dictator Fulgencio Batista? Is the work as much a sham as that of the artist collectives working under Stalin’s iron fist?

Because the fall of the Berlin Wall and the dissolution of the Soviet Union have become historical memories, it provides an opportunity to examine artistic output during this era without anti-communist hysteria. Throughout the text, Curley avoids charges of favoritism toward one side or the other.

His bracing candor and wide-ranging scope rescue him from the sins of moral relativism and false equivalency. While the Soviet Union and the United States each engaged in a fair share of moral hypocrisy, mass murder, and soul-deadening conformism, life for the artist involved very different demands. Art in the United States could be subject to homogenization and commercialization, but an artist in the Soviet Union could be sent to the gulag for not following the ideological tenets of Socialist Realism. The Soviet Union literally bulldozed underground art exhibitions.

The Cold War provided an opportunity (and threat) to artists in the interpretation of their work. Case in point: “Untitled (DSS 123)” by Donald Judd. Judd, a famous practitioner of minimalist sculpture, presents a work at first blush seemingly clinical and innocuous. Created in 1968, it was composed of “ten stainless-steel boxes stacked vertically, each iteration having a translucent yellow Plexiglass panel covering its top and bottom.” This reviewer, in his humble estimation, finds the work rather boring. To a museum attendee during the height of the Cold War could interpret “Untitled (DSS 123)” as being constructed from “sterile materials and industrial fabrication could connote dehumanization and mechanical rigidity, values loosely associated with the American military.” Time, place, and perspective can be a volatile cocktail when it comes to aesthetic interpretation.

During the sixties, the Third Way became popular with the counterculture. “Students and others were frustrated that the promises offered by both capitalism and communism remained largely unfulfilled.” Behind the Iron Curtain, artists had to deal with the heavy hand of the state and a collectivist ideology bent on repressing individual expression. In the capitalist democracies, artists had to contend with their works becoming valuable objects only affordable to the wealthy. During the Vietnam War, activist artists questioned the morality of art museums. Their specific grievances had to do with rich board members who were also part of the military-industrial complex. All in all, both sides were terrible.

By the end of the Cold War, one thing remained clear: Both the United States and the Soviet Union excelled at crushing popularly elected democracies. Each had their pawns on the global chessboard. Curley follows artistic expression to the end of the Cold War and its ambiguous, contradictory aftermath. He spotlights Jeff Koons as an exemplar of capitalist triumphalism and Ai Weiwei’s challenges to China’s political orthodoxies.

As global conflicts have tilted toward the Middle East and the War on Terror has replaced the Cold War as the overarching ideological battle, things remain muddy. China remains a repressive one-party state (Global Art and the Cold War was printed in Hong Kong), yet it has adopted a form of capitalism. The United States is roiling in the aftermath of a contested election (possibly from foreign interference) and a president who postures like a wannabe dictator (at least when he can form complete sentences).

The Cold War involved a decades-long competition between rival ideologies. As the years passed, the certainty of ideological binaries frayed. It ended not with a thermonuclear bang but with a pathetic whimper from a Communist Party bankrupted and decrepit.

Throughout these tumultuous decades, artists have sought to express themselves in harrowing circumstances. John J. Curley provides a lucid summary of the era and unique insights into famous and unknown artists. This book would work well in an undergraduate history survey course. The reflective nature of artist production could offer students a chance to reflect on the interpretative nature of historical practice.

Curley also provides the necessary tonic to puncture the ideological binaries that make Cold War history come across as simplistic and dogmatic. The best summary of Global Art and the Cold War is best explained by Louis Armand, author of The Combinations and Cairo, “Totalitarianism makes art into an obscenity, capitalism makes it idiotic.”