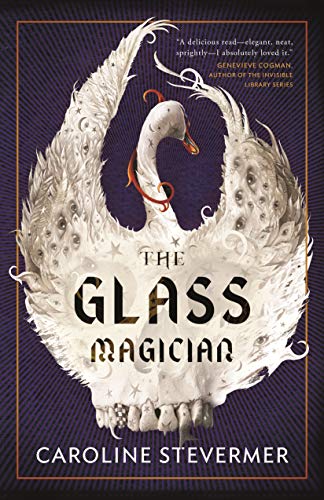 “When a dangerous trick goes awry one evening and threatens to kill her, Thalia unexpectedly shape-shifts. While the transformation saves her life it forces on her the discovery that she isn’t who—or what—she thought she was.”

Set in 1905 during New York’s Gilded Age, this book combines historical fantasy, suspense, and murder under the broad umbrella of stage magic. Award–winning author Caroline Stevermer is known for her historical fantasy novels and the Scholarly Magic Series. She has a following, but familiarity isn’t necessary here: her present mystery thriller stands on its own—or not.

Despite being orphaned, as a young woman protagonist Thalia Cutler has taken up her late father’s trade as a stage magician. She is assisted by David Nutall, the father’s best friend, who now serves as guardian as the two eke out a living as performers.

Three species inhabit their everyday world. Traders constitute the upper class, control vast wealth, and can shape-shift. Solitaires like Thalia are hardworking, poor, and, like the muggles in Harry Potter, unblessed with magic. The mysterious Sylvestri are closely attuned to nature and work to keep it in balance.

When a dangerous trick goes awry one evening and threatens to kill her, Thalia unexpectedly shape-shifts. While the transformation saves her life it forces on her the discovery that she isn’t who—or what—she thought she was. Her family heritage isn’t what she’s been told, and David Nutall isn’t who she thought he was, either. Suddenly her life seems as fake as the illusions she fools audiences with every night.

Amidst this flux her life is suddenly in danger: Thalia’s newly discovered identity attracts a deadly beast called a manticore. Meanwhile, a rival magician whose injunction prevents her from working is killed in the course of a pistol act. Thalia becomes entangled in the murder and ends up as the house guest of a fabulously wealthy Trader who both attracts and repels her.

Unfortunately, this rich ambiguity and others aren’t explored. Romantic intrigue between Thalia and her rich host is implied but fails to move beyond the coy. The two don’t even flirt but instead come across as massively repressed.

The idea behind The Glass Magician is okay but the execution is not. Characters and settings fall short, and we learn little of the former’s inner life. Good material goes undeveloped and worldbuilding suffers gaps. After “the world made itself, the first humans who came were the Sylvestri who helped keep things in balance.” But readers never learn why or how or what purpose they serve in the larger story. The ending dénouement is similarly jejune.

We encounter not-quite-right adjectives: “Faultlessly pressed white shirt.” Elsewhere the author states obvious conclusions better left for the reader to make. Other efforts end in cliché also unlikely to persuade readers: “Thalia soaked in every detail. This was the high life.” Her first dinner at Delmonico’s “might be the best meal she would ever eat,” while the eatery sports “spotless white linen.” In the end, serviceable material feels as if it has been whisked away from the reader’s spotless white linen.