The Glass of Fashion: A Personal History of Fifty Years of Changing Tastes and the People Who Have Inspired Them 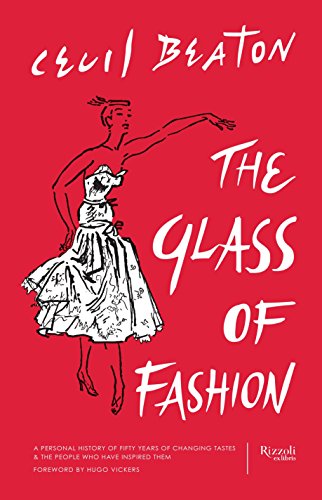 “All in all, The Glass of Fashion is one of the more entertaining books that has surfaced on the topic of fashion.”

Fashion is a rarely a topic that is spoken of as being able to withstand the test of time, and yet The Glass of Fashion achieves that almost impossible feat with skill and grace. Cecil Beaton proves himself to have been storyteller, soothsayer, and alarmingly prescient observer.

You can lead a woman to Dior, but how she will look in it is another matter.

The fact that a statement such as this was first written over 50 years ago is just one that proves indeed that Beaton was not just a man capable of catty comments, catchy descriptors, or bon mots; he was a genuine clairvoyant when it came to addressing matters of fashion.

This is a book that is timely, wildly accurate, and wonderfully entertaining for the fashion aficionado. That is not to say that any reader with a genuine curiosity about Beaton’s wildly eccentric personality won’t be entertained as he was a great social diarist as well as a chronicler of times gone by.

This oversized tome of 400 pages is a series of character exposés filled with vivid descriptions, acerbic wit, arcane facts, and gossip that only a man like Beaton could know. He was after all, a confidante to those who belonged to a social hierarchy that no longer exists today. In more modern parlance, one could say this is a tell-all book but most amusing, mixing gossip and fact for a really fun read.

If some discreet individual becomes “news,” then willingly or unwillingly she must go into the public domain and can be exploited as a celebrity.

Beaton offers up the foibles and odd behavior of the rich and famous and accomplishes it all by writing in such a way that reads like fiction, but is in essence a series of character profiles detailing the lives and habits of his amazing cast of players.

She never ordered one thing of a kind, but duplicated each item by the dozens, with only slight variations in material, lace, or design.

Personally this reader was just delighted with the portrait of Mrs. Lydig. She was indeed one of Beaton’s greatest eccentrics in ways that can barely be imagined in these times. She proffered loose emeralds to her household staff as tokens of appreciation, and she possessed a joie de vivre that is surely in short supply these days.

On why she didn’t believe in locking her doors or closing her windows:

All in all, The Glass of Fashion is one of the more entertaining books that has surfaced on the topic of fashion. Moreover Mr. Beaton oddly foreshadowed what is still visible in the juxtaposition of fashion and celebrity. Mr. Beaton graciously and almost effusively illustrated this book, which provides the reader with a firsthand (pun intended) visual aid that allows concentration on the words without the text overwhelming the abundant visuals.

Would this be a recommended book for the sophisticated, fashionable, and curious reader? The Glass of Fashion deserves to be in the library of any of the above.