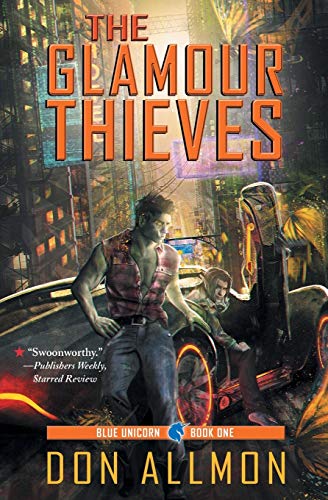 “a fast, funny, and rip-roaring adventure of a few days in the life of an orc who’d like to forget his former association with a certain elf, and the elf who’s fighting against awakening old memories, but not very much . . .”

In an alternate reality where the U.S. is peopled by humans, orcs, wizards, and elves, JT the orc has made a new life for himself. He’s now living in Arizona, doing what he likes to do: building cars instead of stealing them. He also fiddles around with other things electronic.

Then Austin Shea, elven conman, reappears in his life. Austin is like all elves, gorgeous, and knows it, and not at all the magical being JT wants to see. Ever. Well, maybe. He and Austin have a history and he doesn’t want history repeating itself. “The cutting-room floor of JT’s mind was littered with memories in Austin-shaped pieces.”

This time, as usual, Austin has a plan and JT is certain it isn’t going to do him any good.

JT’s drones are something else. They are part of him and he’s part of them.

“It had taken years of training, a hundred thousand dollars of software and a dangerous amount of black market neuropsychoactive drugs to make JT’s brain into something that could process multi-ocular vision for sustained periods of time without suffering a breakdown.”

Austin wants both the drones and JT, and not necessarily in that order.

JT’s in a quandary. He has a board meeting coming up, appointments with bankers, his one big chance to go legit. Before he knows it, he’s agreed to help Austin. “And that was that: apologies and lies all told, they were back where they started. They pulled out of the compound, San Francisco bound.”

Eventually, the truth comes out. Austin’s friend Buzz has stolen something from the Electric Dragon Triad, a data block called the Blue Unicorn. Buzz and JT also have a bit of history, but it’s one they’d like to bring into the present. Buzz had been contacted by the Triad because they had a ghost in their network, a fragment resulting when an AI gets broken.

“’I was this far away from the most important discovery since the Awakening: how to break down the barrier between magic and technology.  It was right in front of me and all I needed to do was work with some bad people for a while.’”

So Buzz steals the fragmented data block. “It’s an honest-to-goddess glamour somehow coded into a broken-off piece of some AI. The glamour takes simulated stimuli and makes it more than real.  It speaks to each individual and stirs up old memories and daydreams and nightmares and makes the world vivid, lush, and seductive.”

The Triad wants it back, of course, and Buzz and Austin are as determined they aren’t going to get it. What are they going to do with the Blue Unicorn?

And then they’re up to their necks in double-dealing wizards, the followers of Owen Ren Leng, the Chinese Necromancer heading the Triad, assorted ninja zombies, JT’s resurrected attraction to Austin, his newly-discovered interested in Buzz, and hovering above it all, the Blue Unicorn, created from the memories and glamour of Austin’s sister Roan.

Who knows how it’s all going to end up?

This is a fast, funny, and rip-roaring adventure of a few days in the life of an orc who’d like to forget his former association with a certain elf, and the elf who’s fighting against awakening old memories, but not very much.  Austin’s glamour may play a big part in his and JT’s relationship but their individual personalities make up the majority of their problems.

Nevertheless, the reader will be cheering for them all the way.

The plot is a well-worn one, old teammates with ambiguous feelings for each other getting together for one last exploit, but author Allmon’s handling makes it something extraordinary. The characters are definitely non-stereotypical, and each one is given enough background to show his niche in this particular tale.

At times, the writing is near poetic in its descriptions. Even at its most earthy and graphic, there’s still a beautiful flow of words and rhythms. The dialogue, especially that between JT and Austin, is filled with rapid-fire ripostes, suggestive and revealing of their feelings toward each other, as well as their resentment.

As for the ending . . . it isn’t really a finish at all, but a segue into the next novel, and the way the setup is handled will make readers wait impatiently for its arrival. The Glamour Thieves does more than steal the Blue Unicorn. It also captures the readers’ interests for the long haul.