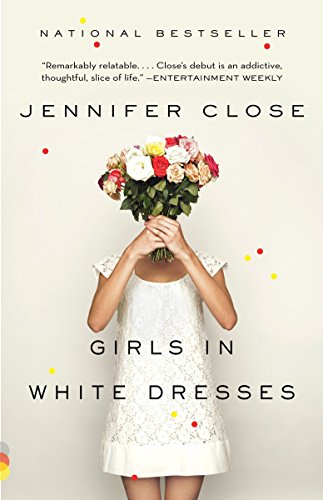 Isabella, Mary, and Lauren have been friends since college. In their early twenties, Isabella and Mary are nonetheless underemployed. Isabella’s primary responsibility at a mailing-list company is getting her bosses the right muffin for breakfast, and Lauren’s job as a waitress leaves her far too much time to imbibe with bartenders who are sleazy—in an attractive sort of way. Mary struggles to balance the urge to spend time with friends with the rigors of law school. And while the three young women trudge along trying to decide what to do with the rest of their lives, it seems that every mutual friend is getting married.

Week after week, they drag themselves to bridal showers and weddings. And if that’s not bad enough, they have to contend with friends who have more than one shower. Kristi holds the record with six. What women who survived those years of insincere cooing at decorative pillows and blushing at barely-there see-through negligees won’t totally relate when Lauren laments, “What I don’t get is why there have to be so many showers just for one person. And why do they have to have themes? Why? Just to make it more annoying than it already is?”

The book’s title derives from one of those showers with an over the top theme of “My Favorite Things.” Ms. Close’s cynical humor shines when one of the shower’s organizers breaks into song, “Girls in white dresses with blue satin sashes.” Again, what women who got showered-out in her twenties and thirties won’t groan and laugh out loud when the other women in the room chime in, “Snowflakes that stay on my nose and eyelashes!”

A few of the seemingly endless collection of brides-to-be have distinguishable traits that make them memorable to the reader. Others seem to appear on the scene with little introduction—and disappear almost as quickly. Readers may find this disorienting and wonder if something was missed.

Girls in White Dresses proceeds to follow Isabella, Mary, and Lauren through their twenties and into their thirties. Along the way, Ms. Close captures that mix of perplexing anticipation, tedium, poor choices, dashed hopes, and resilience that characterizes young adulthood.