Girls' Night Out: A Novel 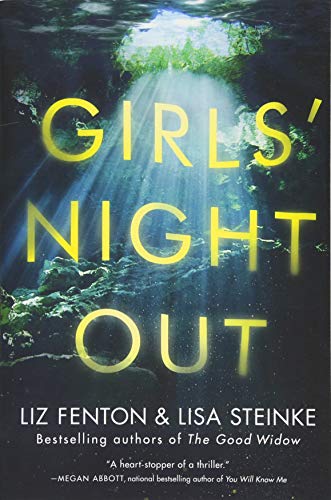 Ashley, Lauren, and Natalie have been through everything together. From college days to husbands to babies to business, they have been there for each other, navigating the good and the bad. But over the past year they have perhaps been through too much together. Lauren, a recent widow, blames Ashley’s meddling for her husband’s suicide, and Natalie feels desperately caught in the middle of her two friends.

And Ashley and Natalie, best friends and business partners, have reached an impasse over the major life decision of selling out their uber-successful BloBrush business to Revlon. While Ashley wants to hold onto the company that so much of her identity now revolves around, the company that has made her not only rich but also famous, Natalie has a secret reason, one she feels she can’t even share with Ashley, for wanting out—and fast.

Despite the serious fissures in their relationships, Ashley believes that a girls’ trip to Mexico where they can relax, reconnect, and truly bond again is all they need to become just as strong as they had always been.

But as Ashley strikes up a friendship with a mysterious man named Marco who Lauren and Natalie don’t quite trust, often leaving her friends to go out with him, the cracks in their relationship grow deeper and more secrets that have the potential to further destroy the bond that these women once shared are revealed.

When Natalie wakes up and finds herself soaking wet on a deserted beach with absolutely no memory of the previous night, she instantly panics. When Lauren wakes up and is unable to find either Natalie or Ashley, she knows something is seriously wrong. And when the two women find each other and go out in search of their friend Ashley at Marco’s apartment, which has been stripped of all furnishings, they realize that the worst has happened—and it is up to them to come back together to find Ashley.

But through police interrogations, Lauren’s doubt of Natalie’s story that she has lost her memory, the painful realization that they will have to tell Ashley’s husband and children the truth, and their lingering fear that maybe Ashley chose to desert them and her family and run off with Marco, the two friends endure a painful few days that will ultimately bring them closer together.

As the story unravels, new clues are discovered, pieces of Natalie’s memory begin to come back, and the friends come to understand that nothing is as it seems and what happened to their friend at Chichen Itza is as foreboding and mysterious as the ruins themselves.

This twisty mystery is full of surprises and suspense but, at its core, is also a story of friendship in all its complexity and a testament to the fact that, in the worst circumstances, we can come to doubt those we love the most and even ourselves—but that, in finding the truth again, we learn all over again what is worth holding onto.

No one is better suited to craft a tale of the ups and downs of friendship and best friends as business partners than Liz Fenton and Lisa Steinke. Girls’ Night Out is their most gripping, fast-paced page turner yet.