The Girl Who Escaped from Auschwitz 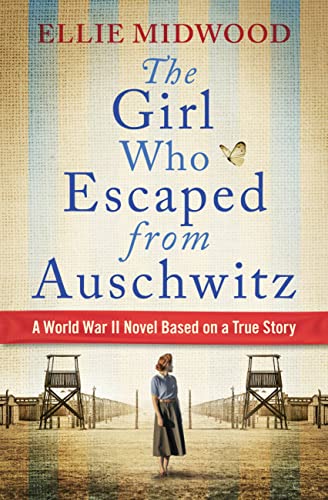 In the 1940s, thousands of Jews and others the Nazis considered "undesirable" are transported to Auschwitz in Germany where their heads are shaved, their bodies disinfected, and then they are sent to showers. The unlucky arrivals are terminated by being gassed and then cremated. Those who survive are those who have special talents, and they are put to work.

Mala Zimetbaum is one of the fortunate ones. Thanks to her father's insistence she continues her education, and so she is chosen for employment upon arrival by the SS due to her knowledge of and ability to fluently speak six languages. Saved from the gas chamber she works under the Birkenau Camp leader, Maria Mandl, processing new arrivals, delivering SS orders, and completing office tasks. Her most distasteful duty is managing the newcomers and recognizing what lies ahead for them. And woe to any newcomer who speaks of the atrocities they see, for they are either clubbed to death or shot on sight.

Fortunately, because of her intelligence, Mala is not stripped of her blonde hair, though she is given civilian clothing that sports the insignia of a "Läuferin" [meaning runner] on her left bicep, to distinguish her from the general population. Still, she is inmate #19880, and her elevated position does not shield her from encountering the same fate as many others.

Meanwhile, inmate #531, Edward "Edek" Galiński, a Polish maritime cadet, is in Auschwitz as well. One of the first political prisoners, he arrived there in June of 1940. Sickened by the Gestapo's actions, he vows to escape for he cannot endure the cruelty he bears as well as what he witnesses. However, due to his circumstances, he concedes to the punishment he receives. Edek befriends a young man named Wieslaw, and he manages to find some comfort in their friendship. They are teamed with other able-bodied young men performing construction work—duties alleged to keep them from the gas chamber.

Mala is granted the relative safety of a closet-sized room, adequate rations, and clothing, unlike most detainees who are shoved into a tiny bunk shared with five others, are starved or given spoiled food, and are forced to wear threadbare clothes even in the deepest freeze of winter. Those who cannot add benefit to the Nazi encampments are gassed, shot, or beaten to death and their bodies are tossed aside in pits like last night’s rubbish.

When professional criminals arrive to "re-educate" the inmates, Edek finds it perplexing the German justice system places murderers, rapists, and thieves above them—former citizens who have broken no laws, but are reviled because of their blood and/or beliefs. The Nazis' logic was felons could be re-educated, whereas Polish nationals, Soviet prisoners of war, and Jews belonged in concentration camps.

While working at hard labor, Edek and Wieslaw discuss many things, faced with the fact they can be sent to a gruesome death at any time. Edek cannot fathom why the SS would eventually kill everyone, and when a historian among them voices the Germans do not want anyone left to talk about their activities in the camps, he knows this to be true. As Edek and Wieslaw plan ways to flee, the historian suggests they go to Birkenau and find a woman named Mala. His comment: "She goes into the office all the time and rumor has it, she's the person to seek if you need something organized. She'll get you your ‘Ausweis’ [identity card], if you ask nicely." Hope arises in Edek, and he believes Mala could be his ticket to freedom.

Surprisingly, Edek also finds an unlikely ally in Kommandoführer Lubusch, who shares the same first name as Edek, and who is married to a Polish girl. Edek is happy to realize there is one Nazi with a conscience, and he begins to trust the young soldier. When one of the inmates purposely jams a printing machine where Edek is working, he is sent to fetch Lubusch to supply punishment. Upon his return, they witness an elder gentleman being beaten almost to death, but Edek steps in and confesses to the misdeed though he is innocent. He cannot stand by while the elder internee is being abused. Lubusch's respect heightens for Edek, knowing he sacrificed himself to save his comrade.

The trains bring more and more people to the camp who are unaware of their fate. While the killing continues, the Nazis celebrate by drinking buckets of schnapps while those who manage to live think:

"Four years. For four intolerably long years the Nazis had tried to slaughter them in different manners—by starving them, beating them, harassing them, exposing them to extreme cold and heat, refusing them medical help and sanitary conditions, but they were still here, still alive and very much breathing, and such an act of ultimate rebellion was worth celebrating."

Mala and Edek plot their escape while remaining stoic and keeping to the rules, believing either the war will cease soon, or they'll manage to get away. The love between them deepens as they plan a future of freedom and hope. But, will that happen? With strength and determination, they meet each day as it comes determined to be free, but will they achieve freedom?

This novel, based on facts, is fictionalized. However, as fiction, it is no less disturbing than what is factual. It is incomprehensible how actions such as these could have occurred and continued for so long without even being acknowledged. Millions of innocent people—families, children, etc., all because of their birthright—wiped away due to the maniacal mind of a demented leader who believed he was "cleaning" the population of those he felt were less worthy. An in-depth study into the brutalities of the past will leave the reader horrified by the Nazis’ total disregard of their fellow humans, as well as open their eyes to the real evil that exists in the world.