Girl Waits with Gun: A Novel 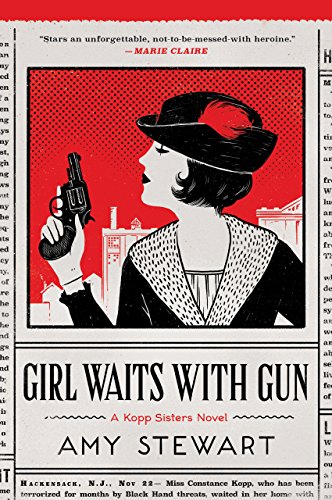 A delightful period piece of a mystery set in 1914, Girl Waits with Gun by Amy Stewart introduces Constance Kopp, eldest of three sisters, none of whom fit the conventional mold of feminine behavior expected by their neighbors. Not that anyone in the Wyckoff, New Jersey, area is surprised by any oddity to do with the Kopp sisters. The apple doesn’t fall too far from the tree, in the neighbors’ opinion, and the deceased mother of the Kopp sisters had been odd in the extreme when she was alive.

Constance is aware that their mother had been strange and that her and her sisters’ rearing had been very different. “She had a dread of doctors, tax collectors, census-takers, inspectors, newspaper reporters, and the police—particularly the police. . . . She never opened the door for strangers. She read salacious newspaper stories to me and Norma as we worked at our sewing, hoping, I suppose, that with each stitch her shocking morality tales would teach us the dangers that a knock at the door could bring.”

Despite her mother’s paranoid efforts, Constance, while a 35-year-old spinster, is not a nervous woman afraid of strangers. At nearly six feet tall and of stocky build, there is hardly anyone, man or woman, that Constance doesn’t literally look down on. When wealthy Henry Kaufman destroys the Kopp sisters’ buggy by hitting it with his automobile, Constance demands that the cocky young mill owner pay for the damages.

“Fifty dollars was no small sum to us. We lived on about six hundred a year, and because we were relying mostly on savings, that fifty dollars took one month of independence away from our dwindling funds.”

When her second demand letter to Kaufman receives no response, Constance confronts the young man at his factory. The confrontation is unpleasant with sexual innuendoes about Fleurette, the youngest Kopp sister, and Constance slams Henry face-first against his office wall in retaliation to his comments. As his no-account friends lounging around in Kaufman’s office take exception to her actions. “Before the other men could get hold of me I was out the door and running past the secretaries.”

Norma, the second of the Kopp sisters, advises Constance to forget about Henry Kaufman. Norma is antisocial, enjoys the isolation of their tiny farm, is devoted to her racing pigeons, her family, and reading newspaper accounts of disasters. Sher predicts that nothing good will come from dunning Kaufman for the fifty dollars he owes them.

Norma’s predictions are correct: Henry Kaufman escalates his argument with Constance by trying to run her over with his automobile. She wants to report him to the police, but Norma isn’t in favor as she distrusts the police as much as her mother had and with no more reason.

Constance does nothing, although a young factory worker’s story of her illegitimate son fathered by Kaufman, and the baby’s subsequent disappearance during a strike does shakes her resolve to forget Henry Kaufman. However, Henry Kaufman does not forget Constance, as a stone thrown through her bedroom window proves. A note threatens that guns will be used next.

That’s enough for Constance. She goes to file a criminal complaint against Kaufman, yet Detective Courter doesn’t take her seriously, but Sheriff Robert Heath does. “I wouldn’t mind a chance to go after that bunch. I suspect they’re up to more than just chasing you and your sisters around.”

Sheriff Heath does more than just talk about pursuing Kaufman; he assigns deputies to watch the Kopp farm, and teaches Constance and Norma how to shoot a gun. When not guarding her sisters with her newly acquired skill with firearms, Constance is investigating the story of the missing, possibly kidnapped baby, of factory worker Lucy Blake. Norma, as expected, is very much against Constance’s action, but when Lucy’s boarding house is deliberately set afire, Constance knows that there is no limit to Henry Kaufman’s evil intentions toward anyone who thwarts him.

Girl Waits with Gun is based on fact. Constance Kopp was the first female deputy sheriff in the United States, hired after her difficulties with Henry Kaufman. She and her sisters eventually ran a private detective firm in the 1920s. Although Ms. Stewart admits to some exaggeration in describing the personal histories and characters of the Kopp sisters, the events in her novel are essentially as she relates them. Or close enough for government work, as no historical work stays entirely with the facts; otherwise, it would not be fiction.

A fascinating historical mystery, or more accurately, a historical thriller, Girl Waits with Gun is a delicious treat for fans hungry for a humorous, well-written novel, with strong, eccentric but likeable characters, set in a period on the cusp of social change. Those who prefer a darker narrative and their characters mired in depressive angst should avoid this work; its appeal is to those who prefer their reality with a more light-hearted touch.