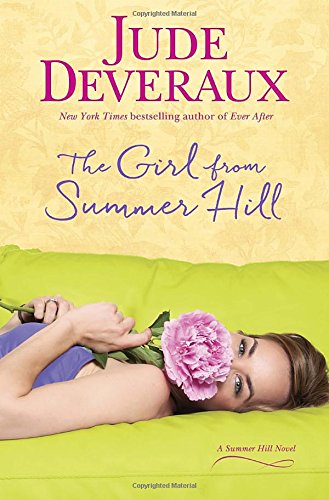 Nearly 200 years after her death, Jane Austen is still a driving force in the romance genre. Jude Deveraux’s latest novel offers a double dose. The first in a new series by Deveraux, The Girl from Summer Hill is sure to draw readers from her earlier series featuring characters from the Montgomery and Taggart families (Nantucket Brides and Forever trilogies), though these characters play a secondary role in this book.

Caterer Casey Reddick has been hired to provide vittles to a presumably starving community theater production of Pride and Prejudice. When Hollywood heartthrob Tate Landers, owner of the plantation on which the play will be performed, and his best friend and action hero Jack Worth make stop to help with casting, they also inadvertently clash with the feisty caterer.

Before you know it the flying visit becomes a summer job, complete with meddling friends, wicked ex-family members, and revelations about troubled past relationships. Misunderstandings and assumptions abound, setting Tate’s pride against Casey’s prejudice.

As in Austen’s novel, there are multiple points of view on display in The Girl from Summer Hill and several romantic tangles: Jack and Gizzy hit it off right away, but he’s easily swayed by his more forceful friend to doubt his ladylove’s affections. An older man with a shady past and a link to Tate plays with Casey’s affection then elopes with a young girl. Above all is the relationship of strong-willed Casey and seemingly arrogant (but maybe not) Tate.

Any Janeite will recognize Austen’s characters and relationships, and indeed Deveraux has structured her book along the loose outlines of Pride and Prejudice. Overheard conversations and assumptions about how people will act and their motivations drive this novel as much as they did Austen’s masterwork.

Deveraux obviously knows her source material well, and she’s made good decisions about what will translate to a modern audience. Assumptions about a person’s character based upon their social status are still rife today (Casey and Tate, Elizabeth and Darcy), as are instances of a powerful person taking advantage of someone who is more naïve (Wickham and both Darcy’s sister and Lydia, in this case represented by Devin, Tate’s sister, and his young co-star). The current era of cell phone video and instant messaging would only have enhanced the misunderstanding between Bingley and Jane, as it does with Jack and Tate.

The novel is less successful in its dialogue. Casey and Tate’s exchanges are stilted and full of contemporary verbal anachronisms; perhaps this comes from Deveraux’s background in historical romance. The syntax and often vocabulary sound unnatural to a modern ear. Exchanges like: “You so wounded my pride that I may never be able to get another woman in bed with me. I think you are the only one who can heal me . . .” and “You are incorrigible,” ring with the tones of regency romance rather than natural contemporary speech. Austen may have recognized the exchange as “rom-com banter,” but it falls flat in a modern setting.

Unconvincing, too, is the play within a play conceit. When it relies on movie stars deciding to do summer stock and gives a caterer (who also co-wrote the script—Why? Who knows?) the main role after she breaks every rule of auditioning by berating her co-star (in regency vocabulary, of course), believability is stretched to the point of breaking.

In the end, what flattens this story is what tends to flatten every “Jane Austen in a modern setting” book: finances. As Shannon Chamberlain pointed out in her excellent piece for The Atlantic, “The Economics of Jane Austen” (August 3, 2014), most of Jane Austen’s heroines are “truffling for funds. This was the occupation of a gentleman’s daughter in the late 18th century.” Because this is decidedly not a preoccupation of most 21st century women, modern adaptations have chosen to jettison this angle while keeping the romances intact.

What they forget is that while the drive behind the women and the men of Austen’s stories is love, the motor is money. Half of Elizabeth’s fire arises from her sense of injustice at having to consider pretty much any offer of marriage; she has no viable option as an impecunious gentleman’s daughter other than marriage. Casey’s disdain for Tate’s celebrity holds only a weak candle to Elizabeth’s righteous anger. The only modern Austen adaptation that truly works is the 1995 movie Clueless, because it’s based on Austen’s only novel whose heroine is not driven by money, Emma.

At any rate, The Girl from Summer Hill will likely appeal to Deveraux’s legion of fans. She clearly knows what her readers like: in an early and particularly effective exchange, Casey is speaking to her friend about the appeal of overbearing romance heroes; when the friend extolls Tate’s characters’ proclivity to “throw women over the saddle of a horse and tell them to shut up,” Casey replies, “What would you say to one of your clients if she told you her boyfriend did that?” Deveraux, through the friend, answers (one suspects, tongue firmly in cheek), “I’d give her the number of a center for abused women and make sure she went. But that’s real; Tate is fantasy.” Deveraux “gets” her current readers; less certain is the appeal of this book to new readers.