Girl in Snow: A Novel 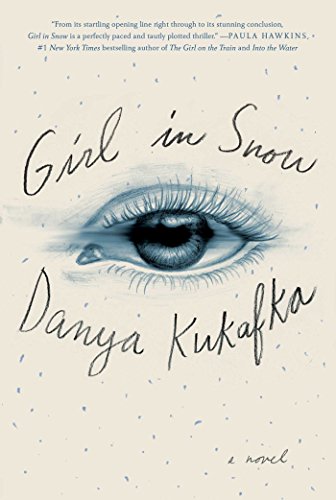 "Kukafka eloquently describes the self-destruction that ensues by allowing others to define us."

Not a mystery nor a thriller in the classical sense, Girl in Snow, Danya Kukafka’s debut novel, focuses less on the search for the murderer of high-school student Lucinda Hayes, as it does on the reactions of three dissimilar individuals to Lucinda alive as well as Lucinda, murder victim.

When fifteen-year-old Cameron Whitley learns of Lucinda’s death he “thought of her shoulder blades and how they framed her naked spine, like a pair of static lungs.”

Cameron draws and paints almost obsessively, and Lucinda is frequently his subject. Not that Lucinda ever purposefully posed for Cameron, but he watched her without being observed, mostly at night.

“Cameron had started playing Statue Nights when he was twelve years old.” That is when he discovers he can push out the window screen in his bedroom and sneak out at night. Standing perfectly still like a statue he watches his neighbors: the Hansens next door, the Thorntons down the block, but most all he watches Lucinda. As long as he stands without moving he believes no one sees him.

Cameron does not consider his Statue Nights to be stalking. “Cameron hated the word stalk. He had other words for his relationship with Lucinda, but they were words no one else would understand.”

Lucinda’s father doesn’t understand. One night he warns Cameron: “I know you don’t mean harm. But you need to leave. If you come back, I will call the police.”

Cameron knows he cannot tell the police about his Statue Nights, but he can’t lie either, because he is a terrible liar. “. . . he found people fascinating when they thought no one was watching.”

What frightens Cameron the most is that he can’t remember the night Lucinda was murdered, but he drew a picture of her dead.

Jade Dixon-Burns is a classmate of Lucinda’s, although Jade’s standing on the high-school food chain is the polar opposite of Lucinda’s. Jade is overweight, with greasy black hair, body piercing, and a fake tattoo she draws on her arm every morning. She is writing a screenplay in which she records conversations with others as she wishes they had occurred but didn’t.

Jade hates Lucinda because the popular girl had dated Jade’s best male friend, Zap, and effectively ended the outcast’s friendship with the boy she believes she loves. She and Zap have been companions since childhood, but Zap as a popular boy is subjected to ridicule for his relationship with Jade.

Jade also blames Lucinda for taking away her babysitting job with the Thorntons, forcing her take a part-time job as a maid at a local hot sheet motel. She observes a young Mexican woman named Querida who meets a man every week for an hour or so at the motel. “. . . how does it feel to be loved like that? Like you and the guy upstairs?” asks Jade one night.

Jade really wants to know, but Querida doesn’t have an answer. Neither does Jade because as Cameron observes “she is always alone.”

So strong is Jade’s hate for Lucinda that she cast a spell she found in a library book on witchcraft. It is supposed to bring misfortune or death, but Jade knows her spell did not murder Lucinda. But someone did. “For the first time, I wonder if I’ve spoken with him—Lucinda’s killer, whoever he is. If I’ve sat across from him and had casual conversations, both of us ignorant to the dark in each other.”

The third person on whom Lucinda’s murder has an impact, awakening memories he would not remember is Russ Fletcher, a police officer in the Bloomsville, Colorado, police department. Russ is assigned to investigate the murder, but he is more concerned about his relationship with Cameron Whitley, the son of his former partner.

“Even the sound of Cameron’s name brings Russ places he’d rather not go The name said aloud: Whitley.” Lee Whitley, Cameron’s father, Russ’s old partner, who vanishes immediately after he is found not guilty of assault by a jury of his peers, but not before asking Russ to look after his son.

No, Russ does not want to remember Lee Whitley for a number of reasons, yet here he is investigating a murder that may have been committed by Lee’s son. All of his secrets are pushing outward from his mind, threatening his peace of mind.

Girl in Snow explores individual identity as seen by others as well as one’s self. Kukafka eloquently describes the self-destruction that ensues by allowing others to define us. Cameron, damaged by his father’s trial and his subsequent abandonment of his wife and son, becomes obsessed with watching others to learn of their secret lives. Jade, who happens to be a gifted writer, allows others to define her as an unattractive, unloved loner. Russ, who refuses to recognize or admit his own feelings, allows his fellow officers and others to pressure him into denying who he is.

Although Kukafka describes her setting in meticulous detail, it is the least successful part of her narrative. It doesn’t have quite the ring of authenticity one expects. The author is very successful at describing the interior lives of Cameron, Jade, and Russ.

Although Cameron’s and Jade’s self-reflections are more verbally detailed (and eloquent) than what one expects of the average teenager, Girl in Snow is a novel to be read on more than level. Cameron and Jade do some foolish things as teenagers do from poor judgement, but they are on another level symbols of the foolish acts and poor judgement of those seeking to know themselves.

Girl in Snow is for fans of literary novels, but those looking for a fast-paced mystery thriller need to look elsewhere.