The Girl in the Mirror: A Novel 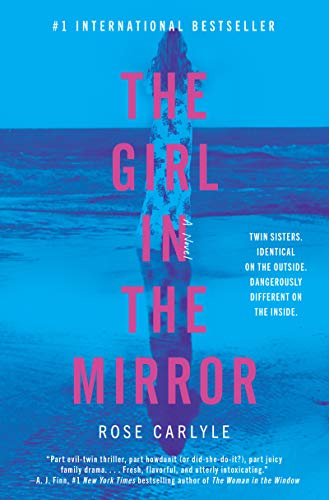 “a chilling story of identity and what happens when a person’s self-reality is voluntarily submerged with another’s.”

“For the first twelve days of our life, we were one person. On the thirteenth day, we split. As it was, our rupture was imperfect. We might look identical, but we’re mirror twins, mirror images of each other. We’re the most extreme case of mirroring the doctors have ever seen. It wasn’t the facial differences, but all my organs are on the wrong side of my body. Inside Summer, though, everything was as it should be. Summer was perfect.”

To everyone, Iris Carmichael’s twin Summer was always the better one. Summer won the beauty pageants, she was the most popular, but Iris told herself it didn’t matter because they were twins, and they loved each other in that special way twins have.

That was before they learned the terms of their father’s will.

Ridge Carmichael leaves everything to the first child to make him a grandfather. His second and third wives are frantic to get their daughters married and pregnant as soon as possible.

“My father’s will was meant to ensure his kingdom stayed undivided, but it divided something more important: his family. His will poisoned his family.”

Summer marries Adam, a widower with an infant son. Iris marries soon after, but as yet neither has a child of her own. Iris and her husband have now separated though no one is yet aware. When Summer’s stepson becomes ill, Iris is asked to come to Thailand and sail the family yacht Bathsheba back to the Seychelles, her brother-in-law’s home.

Iris agrees but when she arrives in Thailand, she learns Summer plans to return with her, leaving Tarquin in his father’s care.

Summer has never been a good sailor; Iris is the one who will be captain on the return voyage.

Once they are at sea, Summer reveals to Iris that she’s pregnant. Iris manages to hide her disappointment and anger. Once again, Summer has won. She will inherit the Carmichael fortune.

She forces herself to accept defeat and at first, everything goes well. They split the duties. Iris stands watch during the day, Summer at night.

Then, one morning Iris wakes to find Summer gone. A check of the shipboard CCTV reveals Summer was raising a sail and got knocked overboard by the mast.

While Iris slept, her twin was washed away. The realization is devastating.

“I’m in the Southern Hemisphere and I’m alone. I’m no longer a twin. Summer is dead.”

Iris tries to find Summer but she has no idea when and where she went overboard. At last, she makes a decision. She will pretend to be Summer—for Adam and for Tarquin.

“Twins grow less alike as they age but that won’t happen now. Summer and Iris are back where they started. They’re one person again. And her name is Summer Rose.”

Everyone accepts her story that Iris is the one who drowned. Iris slips into Summer’s life. She prepares for her own funeral. She adjusts to taking care of Tarquin, as well as being Adam’s wife. The question of Summer’s pregnancy isn’t a problem because in a very short time, thanks to Adam’s love for his wife, Iris finds herself pregnant, also.

In time, Iris gives birth to a daughter, who cements her claim to the Carmichael fortune. In the midst of her happiness, she discovers a fact that will shatter her well-being as well as threaten her life. Iris learns she didn’t know Summer as well as she thought because Summer had a secret even their parents didn’t know.

Iris has become the pawn in a conspiracy orchestrated in such an ingenious way no one would’ve ever guessed—and the fact may get her killed.

There have been several psychological suspense novels written about the curse of being a twin, especially an identical one. These usually run along the lines that twins are basically two of the same person, consciously or unconsciously forced by parents to eat, think, and dress alike, until one rebels and tragedy occurs.

The Girl in the Mirror follows that thesis only so far.

Summer is the dominant twin, but she’s not as perfect as everyone has always thought. Her secret has nothing to do with the order of birth. Their father’s will is only the catalyst bringing her true nature into the open. In the beginning, Iris strives merely to keep her sister’s memory alive, but as she becomes deeper involved in her deception, her personality gradually dissolves into Summer’s, into the time when she and her sister were one.

The twist to the story is such that many readers may be left scratching their heads, uncertain of the meaning of that final paragraph. The Girl in the Mirror is a chilling story of identity and what happens when a person’s self-reality is voluntarily submerged with another’s.