Girl Before a Mirror 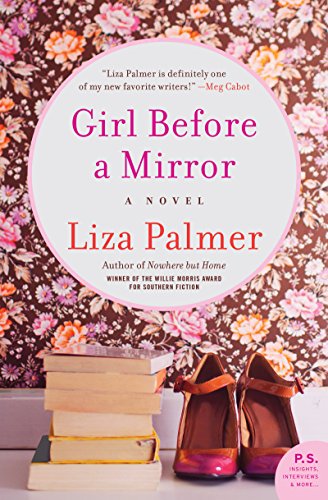 “In Girl Before a Mirror, Liza Palmer has taken a lovely look at post-feminist womanhood in which the desire to be accepted for who and what one might be is not a given.”

As a credo for contemporary women, one could do worse than this statement by the heroine of Liza Palmer’s newest novel, Girl Before a Mirror.

Forty year-old Anna Wyatt is at a life crossroads. Divorced, hungry for advancement in her blueblood-filled advertising agency, and saddled with an alcoholic brother and angst from a lonely childhood, Anna chooses to act on at least one of the issues she lists above.

She pursues the account for Lumineux shower gel, the venerable bedrock of a major company, hoping that by reviving that brand she will push her own career forward. What she doesn’t count on is being assigned a young, beautiful (but inexperienced) partner, or finding herself thrust into the world of romance novels and cover models in her attempt to secure the deal. She’s also blindsided by a hotel affair that feels like it could be more than a one-night stand.

The list of what Liza Palmer does right with this not–as-light-as-it-sounds novel is lengthy. First is Anna herself. She’s smart (and she knows it), wryly funny, and secure. What a refreshing change from the litany of self-hating, insecure romance novel heroines!

When a beau quotes a Springsteen lyric to her, intimating that her looks are just okay, is Anna thrust into an angst spiral of “I’m hideous! How can I change to make him love me”? Nope. She realizes that she’s been in a post-divorce whirl of not-quite-right lovers and takes a dating break. When she recognizes that many of her circle of friends have devolved into acquaintances, she gently trims her group to those that matter to her. When she thinks her work has been denigrated, she doesn’t cry to her girlfriends: she confronts the big boss. In other words, Anna is an adult.

The next right thing author Palmer accomplishes is in the female relationships in the novel. Early on in the novel, Sasha is assigned to help Anna in landing the Lumineux campaign. Anna notes right away that Sasha is beautiful . . . and that’s the end of it. No wailing and gnashing of teeth that Sasha will outshine her or weeping over the charms of 25 versus 40. There aren’t any scenes of the femme fatale stealing man, job, or reputation. In fact, Anna doesn’t appear to be anything but supportive of her younger colleague.

Anna is presented as a woman who is secure in her skills; the one time Sasha’s charms are presented as a negative is by another, older woman who is not so secure in her position or talents. Anna brushes this off with scorn. The same sort of consideration goes into Palmer’s treatment of other women and their relationships: none are angels, none are devils, and none exhibit the dispiritingly common practice of setting up the book’s protagonist against all other women (besides the ubiquitous “bestie”). Well done.

Ms. Palmer’s handing of the romance novel in general, and for followers of the genre in particular, is to be applauded. During the course of the novel, Anna goes from a woman who has a definite public bias against these novels to someone who respects their appeal.

Palmer deftly captures a picture many women will find relatable: the woman who wants to feel swept away, but doesn’t want anyone to know about it, lest she be judged. This is Anna to a tee, and likely many of Palmer’s readers as well.

For any reader (or writer) of romance novels, the dressing down Anna gets from a best-selling romance author alone is worth the price of the book! How Anna reconciles her learned distaste for the genre and the joy she sees magnified in attendees of the RomanceCon she attends in the course of the novel, and indeed in herself, is very believable.

Finally, the structure of the novel is clever. Anna’s aforementioned distaste for romance books would have created an easy road to skewering the genre as a whole, but Ms. Palmer shakes things up a bit by gently tweaking romantic comedy tropes—within a romantic comedy. From the bar “meet cute” of Anna and her romantic lead, Lincoln, to the oft-repeated statement, “Broken people make the best heroes,” to Anna’s realizations about how her past created who she’s become, to the triumphant ending, this is a romance novel through and through.

What sets Girl Before a Mirror apart is that Palmer takes these tropes and flips them about: the meet cute becomes an adult discussion of what is realistic for both schedules; there are no miraculous healings of emotional scars—the work involved for healing is highlighted; and, yes, there is a price to be paid for standing up for one’s self.

The negatives in this book? Not many. The beginning is a bit awkward, with the establishing scene of Anna developing the idea to try for the Lumineux account shoehorned into another scene, and the ending is a bit rushed. The characters of Anna’s stable of friends are underdeveloped (Michael’s wife and Hannah’s husband could easily have been left on the cutting room floor), but these dim instances are small and easily outshined by the humor and clever dialogue of the book.

In Girl Before a Mirror, Liza Palmer has taken a lovely look at post-feminist womanhood in which the desire to be accepted for who and what one might be is not a given. Where a woman’s desire “to be loved and give love unreservedly in return” calls her intelligence into question. Where a desire to be “human. And sexual. And vital. And equal. Every version of us” is a dream, but not a reality for every woman. And Palmer does it with humor, warmth, and respect for her readers. Kudos, Liza Palmer.