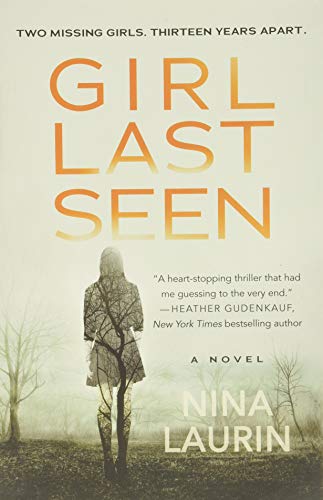 “A well-written and compelling novel that offers more than suspense; it offers a deeper understanding of how sexual assault can leave its victims broken. Ms. Laurin is to be congratulated for her achievement . . .”

Nina Laurin hits a homerun with her debut suspense novel, Girl Last Seen. Featuring a flawed protagonist desperate to leave her past behind, Girl Last Seen explores the reasons behind the bad choices a victim of a sexual crime may make, as well as the courage required to prevent her predator from claiming another victim.

Ten-year-old Ella Santos is abducted although it is several days before her abusive, drunken mother bothers to report her missing.

Three years later Ella Santos is found on the edge of a road with inch-wide scars on her wrists and ankles. And pregnant.

Ten years pass, and Ella Santos is now Laine Moreno, addicted to whatever drugs she can buy or steal, living in by herself in a squalid apartment because she can’t stand to share space with anyone else, and working at whatever menial job she can find.

She told the police everything she knew about her abduction, but has never been able to identify or even describe her abductor. But she remembers the basement in which she was imprisoned for three years, remembers the low ceiling, the concrete floor, the chains and ropes. But her abductor always wore a mask, so she never saw his face.

Her shrink calls her Lainey, but she prefers Laine, not that it matters. “I didn’t even choose the name. They picked it at random at the hospital, some soap opera heroine’s first name and a generic surname to go with it. As unremarkable as possible. Hiding me in plain sight—that was the rationale.” In a sense Lainey’s abductor stole not only her innocence, but her very identity.

When Lainey’s boss hands her some missing persons’ circulars to post in the grocery store, Lainey’s life becomes even more chaotic. “I force myself to look at the face in the photo . . . Oliva Shaw could be my mirror image, rewound to thirteen years ago . . . Another thing I know from my late-night Internet forays: kidnappers, rapists, serial killers—they don’t just stop. They are stopped.  Whoever stole me—stole Ella—was never found. But in the last ten years, there hasn’t been another girl. And now there is.”

Lainey instinctively knows that whoever kidnapped Olivia Shaw is the same man who kidnapped her. Her instinct is confirmed when Sean Ortiz, the police officer who found her on the side of the road and now a detective with the Seattle PD, contacts her at the bar where she works the late shift.

Terrified by the past that Sean conjures up, Lainey runs. ”In the books and movies, the broken girl always dies at the end. Sometimes she’s allowed one final heroic act, one last snarky line before she goes out . . . But she always dies, because she’s too tarnished to live.”

Lainey sees herself as tarnished, and wishes she had died because she is “A living dead girl.” When Sean tells her that Olivia Shaw is her daughter, the baby that she gave birth to after being released by her abductor, the baby taken from her by the authorities because she was too young and incapable of caring for an infant, Lainey is conflicted. “What am I supposed to feel for the girl? For the child whose father kept me in a basement for three years, who—“

The police believe that Lainey may know something about Olivia’s abduction, that she might even have taken part in it. Sean is sure that is not true, but it is a possibility that must be considered. “We’ll need you to make a statement about where you were the day she went missing.”

Lainey is caught up in a nightmare. She wears long sleeves and high boots to hide the thick scars on her wrists and ankles that are the daily reminders of her abductor, his brands on her flesh, but still the police are suspicious.

Not only are the police—all but Sean—a threat to her, but Lainey discovers that someone has been in her apartment and stolen her laptop and some of her stash of pills. She no longer has a safe haven. Instead of reporting the break-in, Lainey hides out at her friend Natalia’s house.

Then, Jacqueline Shaw, Olivia’s adopted mother, calls Lainey. “We talked to the police and Detective Ortiz, and we would like to meet you.”

The meeting with Thomas and Jacqueline Shaw is a surreal experience for Lainey and for them, but it marks a turning point. Lainey becomes much more involved in the hunt for Olivia, the child she never got to hold. Along the way she experiences betrayal by those she thought might—maybe—be her friends, and learns of an earlier betrayal that was the impetus for her abduction.

Girl Last Seen is almost painful to read as both the suspense and the betrayals mount. While one might be irritated by some of Lainey’s bad choices, one can understand the horrible damage that was inflicted on her and the memories that linger with her every day. One also feels the anger at the callous way social services treated her. What is remarkable about Lainey Moreno, or Ella Santos, is her courage. She may believe that she is tarnished, but her character is pure gold when it counts.

A well-written and compelling novel that offers more than suspense; it offers a deeper understanding of how sexual assault can leave its victims broken. Ms. Laurin is to be congratulated for her achievement, and one looks forward to her next novel.