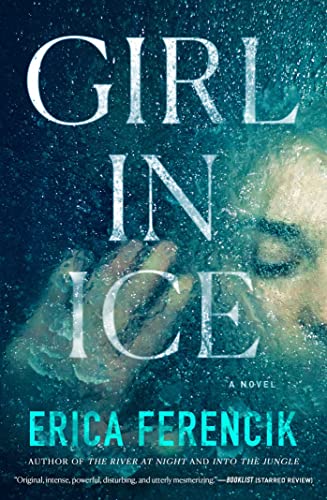 A gifted linguistics professor who is fascinated by such extinct languages as Old Norse and Old Danish, Val Chesterfield is so frightened of the world that she has immured herself at the university where she teaches and treats her overwhelming anxiety with pills and bottles of Amaretto and merlot.

Beyond that, she’s mourning the loss of her marriage and the death and possible suicide of Andy, her twin brother who died of exposure on Taaramiut Island off Greenland’s northwest coast.

And so, when an email from Wyatt Speeks who is overseeing the scientific lab on Taaramiut, pops up in her inbox, Val’s first thought is to hit delete. But despite her own initial forebodings, she opens it instead.

Wyatt is asking her to listen to the attached vocalizations of a girl they extracted from the ice and who has, amazingly and impossibly, thawed out alive. Playing the sounds over and over again, Chesterfield is intrigued. The girl is not speaking any of the Greenlandic dialects spoken in the frigid part of the world where Wyatt is located. Indeed, despite Val’s vast repertoire and knowledge, she cannot recognize the language at all.

Wyatt wants Val to fly out and study the girl’s language. But that entails her leaving her office, her shelves of books, and her everyday routines. When Val visits her elderly father, a noted climate scientist who has always been disdainful of her, he dismisses that the girl could have been thawed out alive and that his daughter has the spunk to travel so far away.

“You’ve never been out of Massachusetts,” he tells Val. But he also wants her to go, to find out the truth about Andy’s death and delivers an ultimatum. If she doesn’t journey to Greenland, then he doesn’t want to ever see her again.

The winds blow over 50 miles an hour on Taaramiut across a landscape barren of anything but snow, glaciers, water pocked with ice floes, deep seemingly bottomless crevasses, and herds of caribou. No native people live this far north, so where did the girl come from and how long was she encased in ice?

Totally isolated, the small community consists only of Wyatt and his assistant Jeanne, Val and a young couple who have won a coveted spot to dive in the frigid waters for specimens. And, of course, the girl who once was frozen and is now strangely alive.

But it’s not just the isolation, the young girl who speaks a strange language, and being where her brother died outside, alone in the bitter cold, that is unnerving. Wyatt seems to have other hidden agendas and Jeanne may be too good with knives—and she has so many. Even the couple become uneasy, urging Val to just play along until the plane arrives to take them home.

With the disappearance of her anti-anxiety medication, Val is unable to sleep and maybe unable to reliably process what is happening around her. She takes risky chances, and she also has become maternally attached to the young girl as she learns the meaning of her words. What is part of Val’s uneven emotional state and what is real become less defined. She believes Wyatt’s stated quest—to learn how to prevent a cataclysmic climate change, one where sudden outbursts of frozen winds are freezing people to death almost instantaneously around the world—parallel Andy’s own dedicated studies.

But Val also senses a scary undercurrent and the more she learns, the more she wonders if Andy really committed suicide by wandering off into the cold or whether someone locked him outside. To add to her distress, the young girl is ill and is trying to tell Val in her own language what she needs to survive.

Jane Simon Ammeson is the author of 14 books including Hauntings of the Underground Railroad: Ghosts of the Midwest.