The Girl from the Garden: A Novel 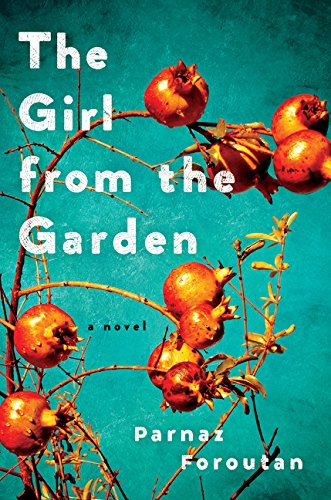 In her powerful and moving debut novel, Parnaz Foroutan paints a picture of life at the beginning of the 20th century in Iran for a family of wealthy Persian Jews. The story is one of cultural conservatism, family hierarchy and inheritance, male dominance, and female oppression. Somewhat reminiscent of Khaled Hosseini’s A Thousand Splendid Suns in its focus on the relationship between two women married to the same man, the story is all the more compelling because it draws upon Foroutan’s own family’s history.

The tale of longing, loss, competition, passion, and betrayal revolves around Rakhel, the first wife of family patriarch Asher Malacouti, and his second wife, Kokab, whom he marries because Rakhel has failed to give him a son. Also key to the story is Khorsheed, Rakhel’s only friend and wife of Asher’s brother, Ibrahim, who has borne a son.

Foroutan creates a tapestry of interwoven, limited lives barely lived in a family compound replete with gardens, fountains, starry nights, and disillusioned, trapped characters. Powerful men rule; women are enshrouded and silenced. Honor, tradition, personal shame, and filial loyalty dominate the decisions Asher imposes on his extended family members, and it is his inability to relinquish or grow beyond any of those driving themes that lead to the tragic denouement of this moving story.

Like many other excellent cross-cultural novels, this one reveals a world few can imagine. Women, whose only social life consists of gossiping with or comforting other women, visit each other “to help, to mourn, to tell stories.” Knocking on the door, they use a female-designated knocker. The woman answering puts a finger in her mouth, “in the corner of her cheek, to mask her voice before asking who is calling and for what business, so that the sweetness of her voice might not lead a man behind the door to sinful thought, rouse him to break open that very door and drag her down in shame.”

A scene in which a marriage is being arranged opens a window to traditions that have led to the Indian phrase, “For every bride, a rape.” Rakhel is barely a teenager when Asher’s mother selects her to be his wife. “This one,” she tells her son, “this one is intelligent and not lazy. She has no deformities, her skin is healthy. Yes, this one will be a good match for you.” Is it any wonder that Gloria Steinem said of the book, it is about “the devastating choices women face when their worth is tied to their wombs but not themselves”?

What happens to Asher, Rakhel, Kokab, and Khorsheed as this story unfolds is suspenseful and ultimately haunting, largely because Foroutan knows her craft. She structures her story so that readers are drawn into the complexities of compound life and the necessarily complicated relationships of the characters who reside there. The forces that drive their actions, the unutterable pain they are compelled to endure, and the necessary allegiances they form are shared from a place of knowing, artfully displayed.

In short this is a riveting, finely wrought novel by an author who joins the ranks of other young cross-cultural writers who tell their stories through the lens of gender. In that tradition, it will not be easily forgotten.